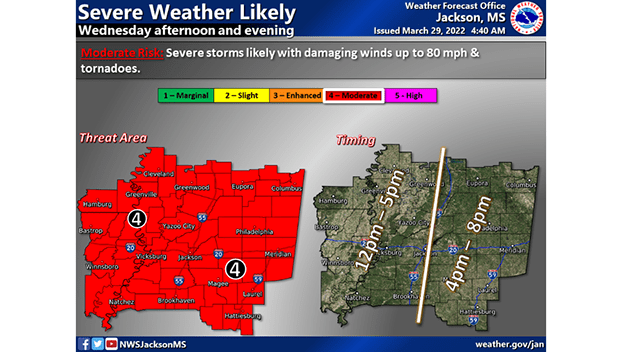 JACKSON — According to the National Weather Service office in Jackson, a severe storm capable of producing winds with speeds up to 80 miles per hour and tornadoes is forecasted to hit Southwest and Central Mississippi. The storm should hit west Mississippi anywhere from 12 p.m. to 5 p.m. according to the forecast issued at 4:40 a.m. on Tuesday.

In addition to severe storms, Natchez is under a flood warning until April 6 and a wind advisory is in effect Wednesday from 9 a.m. to 7 p.m.

The NWS forecasts 100% rain tomorrow with the amount of precipitation being anywhere from three quarters of an inch to a full inch of rain. As of right now, the Adams County Emergency Management Agency is not recommending any closings due to the timing of the weather system.

Concordia Parish School District said they are monitoring the weather for Wednesday and will make a decision on schools no later than 8 p.m. Tuesday.

Send photos of storm damage, your name and the location the photos are taken to have them featured in a gallery to hunter.cloud@natchezdemocrat.com.

‘Something not of this world’: Local photographer captures images…