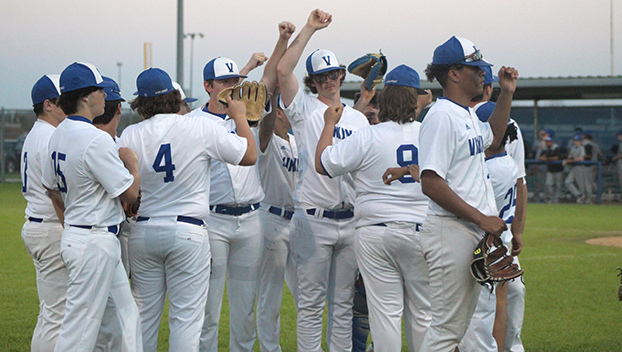 Vidalia is 1-11 this season but their first year head coach Seth Thompson can see the silver lining in a 18-5 loss to Buckeye. At one point, Vidalia led the ball game 5-4 and they stayed competitive for five innings. Vidalia has been plagued by injuries. (Hunter Cloud | The Natchez Democrat)

VIDALIA — Vikings Head Coach Seth Thompson said he was looking at the silver lining of Vidalia’s 18-5 loss to Buckeye Monday afternoon. At the start of the year, the Vikings lost to Buckeye 15-0 in one inning.

At one point Monday, the Vikings took a 5-4 lead over Buckeye before the Panthers roared back to win by a run-rule in five innings. Some of the players came off the field and said “I miss Brett (Walsworth), I miss Peyton (Fort).” They were seniors who anchored the Vikings last year.

Thompson said he wants his guys to continue on the same path they are on. He has seen the growth in their play, even if their record and scores may not reflect it.

“The last time we played them, it was a two-hour first inning. They gave us three outs, and they let us hit. We had to quit the game like that,” Thompson said. “We just held them for five innings and stayed competitive. There is growth. We want them to continue the path and keep getting better.”

Vidalia’s main challenge this season is the amount of inexperience they have. He said while they have a few upperclassmen this year, those guys are playing varsity baseball for the first time.

Several of the kids have struggled with arm injuries and can’t throw. One of those is the shortstop Jack Spears. He is a guy who can throw in the 80s but can’t because of an elbow injury, Thompson said.

Tyrin Jordan was not able to return from injury until this week. Nate Tattum hurt his shoulder last week sliding into home plate. Tattum said he would not be clear to play until Friday.

“This team is depleted,” Thompson said. “We can’t get down though. It is easy to get depressed, but they have to see the silver lining. They should start seeing it in themselves. We should start to win some ball games.”

Thompson said his team should have been 2-0 in district play, but they let games against Delhi Charter slip away. Last Friday, they lost 28-24, and Thursday, they lost 13-8.

“I’m happy with their growth. We are starting to compete,” Thompson said. “When you have four arms and have to stretch them out it is tough. the growth is there. I’m proud of where we are at today instead of where we were on day one.”

Rebels compete as a team in loss to St.…