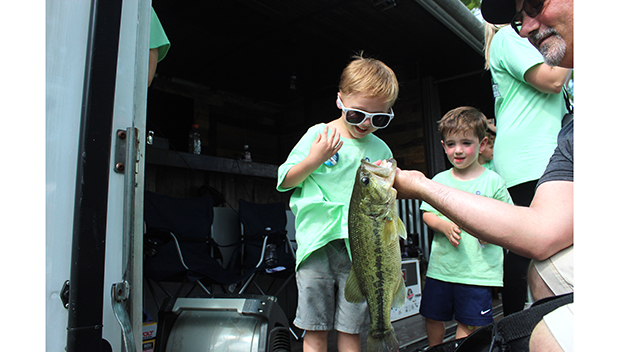 Left, Asher Farmer shakes his hand after holding a largemouth bass caught by David Cooper. Asher's brother Owen looks on at right. Asher was diagnosed with Cystic Fibrosis four years ago and the Kickn' Bass for Cystic Fibrosis Tournament at Lake St. John was started by his Uncle Chris McVay. (Hunter Cloud The Natchez Democrat)

Anglers will start at safe daylight from the Spokane Boat Launch and end by 3 p.m.

The tournament was founded by Chris McVay five years ago, when his nephew Asher Farmer was diagnosed with cystic fibrosis.

Asher is the son of Heather and Kevin Farmer, who discovered he had cystic fibrosis three days after his birth. The family do not live in the Miss-Lou, but they often vacation and fish at Lake St. John.

McVay said when he heard the news he knew he had to do something, and the only thing he knew he could do well was fishing. By organizing the tournament, McVay and supporters who want to help the family are able to raise funds for the Cystic Fibrosis Foundation. Last year, more than $5,000 was raised for the foundation from the tournament.

“It has been a bright spot,” McVay said. “It is for the family and supporting them, while also bringing awareness to the disease.”

According to the Cystic Fibrosis Foundation website, cystic fibrosis is a genetic disease affecting the lungs, pancreas and other organs. It can cause persistent lung infections and limits the ability to breathe over time.

Proceeds from the tournament go to the Cystic Fibrosis Foundation to raise awareness and find a cure for cystic fibrosis. In the tournament’s first year, there were about 25 entries. McVay’s goal has been to grow the tournament every year, and last year 68 boats entered. McVay said he isn’t sure how many more anglers the lake can handle.

Preparations for the tournament start in January as McVay calls companies in the area. Kickin’ Bass for Cystic Fibrosis offers door prizes which people can buy raffle tickets for. Food is provided for the anglers at the weigh-in. Last year, Kickin’ Bass t-shirts were sold.

Entry fees for the tournament are $130 with 30 percent going to the foundation and the rest goes to the anglers. The entry fee includes the launch fee and a $10 big bass entry.

McVay said if they took too much for the foundation then anglers wouldn’t have a purpose to fish.

The 70% of money from the entry fee goes into the prize pot. Prizes include a five bass stringer and payouts are based on a 50 boat entry. Kickin’ Bass will pay an additional place for every 10 additional entries. First place wins $1,400, second place wins $960, third wins $670, fourth wins $490 and fifth wins $330. The big bass winner takes home $500.

“One thing about a benefit, folks feel like they have to give the prize money back. I encourage those guys to keep it,” McVay said. “We had a guy last year donate his entire winnings back. It is not expected but it is appreciated.

“We are not benefiting a family who has fallen on hard times where every penny makes a difference. In the grand scheme of things, it won’t make that big of a difference to the foundation. It’s but a drop in the bucket for them. We encourage anglers to keep their winnings.”

Entry forms must include the name, address, phone number and signature of the boat operator and co-angler. Make checks payable to Chris McVay. Forms and fees must be sent to 2508 Orleans Quarters Drive, Brusly, Louisiana 70719 and received by May 19.

Boat numbers are assigned by entry so the first entry he receives will be boat No.1 and so on.

Entries will be accepted at check-in the morning of the tournament, but they will have to be in cash, McVay said. Raffle tickets for $5 will be available for purchase at registration and winners will be announced at the weigh-in.

Raising funds outside of fishing, awareness

People don’t have to fish to donate to the cause. Every year, McVay says a couple drops a check off for the foundation but does not enter the bass fishing tournament. Those who wish to donate are asked to make the check out to the Cystic Fibrosis Foundation.

Awareness is the other important goal of the tournament. During the weigh in last year, Asher ran around and played football with his cousins, held a bass and danced with the energy any four-year-old would.

McVay said Asher isn’t able to digest fats the same way a person without CF could. He isn’t able to have a snack and a sweet treat like ice cream requires him to take a pill with enzymes to help break it down. Yet, he continues to grow and thrive.

“Asher is a stud,” McVay said. “He is a big kid. He is as lean as he can be but he is tall. It’s great because it is a sign the enzymes and the treatment he is undergoing is helping him grow.”

Asher is still too young to be out on the water fishing all day. He will turn 5 sometime in June, McVay said. However, he will be running around playing with his cousins this year.

“To him it is life as he knows it. He is doing well. You would look at him and you would never have a clue,” McVay said. “I think the CF foundation and research have made great strides. The longevity of a person diagnosed with CF has increased. Hopefully for many many years he can live a normal life.”

Natchez named one of best small towns by Southern…