‘Up to code’: Ridgecrest Police Chief thankful for new equipment 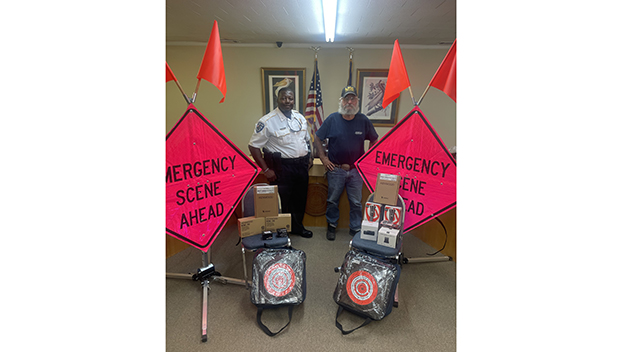 RIDGECREST, La. — The Ridgecrest Police Department is the recipient of some much-needed equipment, thanks to the help of a number of individuals and agencies.

Ridgecrest Police Chief Michael Johnson said he has been at work since October 2021 to build a quality, responsible department for the residents of Ridgecrest and has received much help and support in that effort.

“The equipment includes up-to-date flashlights, that are rechargeable, as well as Guardian Angels. Those are basically lights that officers wear on their shoulders for safety. We have the lights on the police units, but when we make a stop, we may need to walk off from the car, and the Guardian Angels are lights that keep the officer safe,” Johnson said.

The department received new radios and new body cameras for officers and the police vehicles.

“Those cameras will observe traffic stops and basically tell the story of the event. They are for residents’ safety and for officers’ safety,” he said.

The department also received new signs to be used to block off roadways in an emergency.

“With those emergency signs, we can close off roadways when that is needed, without having to call sheriff’s deputies or someone else to do it,” Johnson said.

“This equipment means the Ridgecrest Police Department is up to code,” Johnson said.

At present, the Ridgecrest department consists of Johnson and a reserve officer. However, Johnson said he is working with the Louisiana Chiefs of Police Association on how his department should be staffed.

“We are looking for other ways to fund our department. I have been working with other police chiefs so I can get the right guidance on staffing and funding. I want to put officers in Ridgecrest full time. That’s my next goal,” he said.

“Basically, since I took over as chief, I have worked closely with Concordia Parish Sheriff David Hedrick and the Ferriday Police Chief Bo Stevens. I would also like to thank Vidalia Police Chief Joey Merrill and Bobby Madison in Clayton,” he said. “They have been coaching me and helping me, and when I’m not able to get there, the sheriff’s deputies are right there.”

Johnson invites members of the Ridgecrest community to come discuss their concerns with him.

“I am always available. I have an open door policy,” he said.