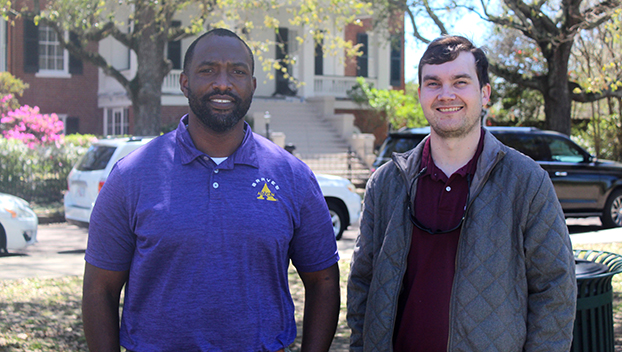 From left, Silas Simmons employees Torrey Groce and Newt Riley out on the Natchez Bluff during the company’s Friday lunch. A food truck with music and coolers of cold cans of soda were out in the picnic area next to Rosalie and Broadway, close to where The Dart landed Friday afternoon. (Hunter Cloud | The Natchez Democrat)

When told that they were relaxing near where The Dart landed, Natchez native Torrey Groce and Brookhaven native Newt Riley were nominated to share their stories.

Groce grew up in Natchez and went to Natchez High School. He attended Alcorn State University and served in the United States Marine Corps for seven years before working at Silas Simmons.

Riley attended Brookhaven Academy and Mississippi State University, where he got his bachelor’s and master’s degrees before working at Silas Simmons. His family has ties to Natchez, and he said he spent many weekends on Lake St. John, where his family has a lake house.

“When the opportunity came up, I felt at home. It was an easy decision for me,” Riley said of joining the firm.

“As senior associates, we handle a lot of tax returns, and we review returns,” Riley said. “We are also like a mentor to newer people. Torrey was my mentor my first year.”

Groce said when he was at Alcorn State, he had the choice to intern at the City of Natchez or Silas Simmons. It was his first accounting job and after serving in the military, he realized he was most comfortable at home.

“I’ve been back home ever since. It’s just home. I like knowing my neighbor,” Groce said. “I can walk somewhere without planning to meet someone, and I will always run into someone I know. I like how I feel at home no matter where I go. It’s a running joke at the office: if you stay around here long enough, you can’t go somewhere without meeting people you know.”

Lake St. John and The Camp on Silver Street are Riley’s favorite places in Natchez. He said he likes to hang out with people and drink a beverage looking out to the Mississippi River.

Natchez native Groce said there was so much about the city he enjoys that he couldn’t pick a favorite place or part. He believes the best-kept secret about Natchez is the number of things happening here.

“When I have friends come to town, they are shocked by the food and the stuff we have going on,” Groce said. “For a town our size, we have a lot going on. There is always something going on, whether it be the mudbug festival, mardi gras parties, or stag parties.”