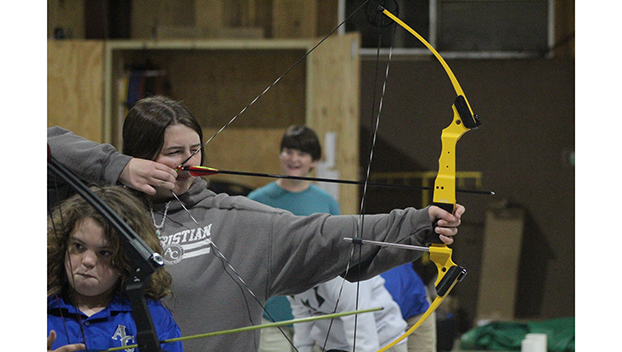 AC freshman Phoebe Hale aims her arrow at a target in practice Tuesday. She started archery three years ago along with her brother Drake. (Hunter Cloud | The Natchez Democrat)

NATCHEZ — Phoebe and Drake Hale began shooting with Adams County Christian School’s archery program three years ago. Now, the siblings are preparing to compete with teammates in the state finals.

Individually, Phoebe shot a 252 at South State and Drake was hot on her heels with a 247 in the high school division. Their younger brother Cooper shoots at the elementary level and shot 213 at South State.

Phoebe started shooting as a sixth-grader and is a freshman now, Drake started as a fourth-grader and is in seventh grade. They were homeschooled and wanted to have something to do, she said.

“I just wanted to try it out and see what it would be like,” Phoebe said. “I thought it was fun. At first when you start out it brings you down if you aren’t good. Seeing your improvement, you feel like you are on cloud nine.”

Phoebe said it takes time to get good at archery, unless you are naturally good at it. Drake said he enjoys reaching the little achievements over time. Anytime he shoots one more point above his record is another reason for him to come back, notch an arrow and let it fly.

“I still try for a perfect 50. I just enjoy trying to be better,” Drake said. “It feels better when you see how far you have come.”

This will be the first year since they started archery that they will go to the state finals held at the Kirk Fordice Equine Center. Drake said he was excited to experience the atmosphere, as previous state meets were shot remotely because of COVID.

Hundreds of students from across Mississippi will shoot at the state finals held April 4 to April 9.

“It’s good to have a challenge,” Phoebe said. “Personally, I rather shoot against better shooters. It proves to me I can do it. It makes me want to stride more and it makes me feel like I did something.”

Sibling competition is high between them. “I want to beat my brother at state,” Phoebe said. “If one of us shoots better than the other the whole school will know.”

‘This is home to me,’ Davis plans to stay…