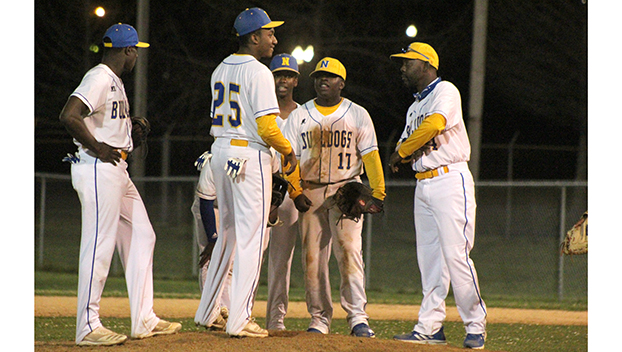 Head Coach Dan Smith talks with his team on the mound during a game against Brookhaven last Friday. Brookhaven won 8-0 as pitching was an issue for the Bulldogs. He said the team is continuing to improve. (Hunter Cloud | The Natchez Democrat)

NATCHEZ — Friday night, Brookhaven led Natchez 2-0 after five innings. Two runs in the sixth and four runs in the seventh put the Bulldogs in an 8-0 hole.

Natchez wasn’t able to push any runs across the plate in the final frame as they lost 8-0. Brookhaven took advantage of some walks to get timely hits in the win. Brookhaven had seven hits in the game.

“Walks, they got us again,” Head Coach Dan Smith said. “I’ll always go back to it. Those walks came back to bite us. The first part of the game was the best we played all year. Defense and pitching win games. I was proud of them for staying in the game.”

Natchez held the Panthers off the board before giving up the first run in the fourth inning. Traylon Minor threw five innings for the Bulldogs and struck out four batters.

Brookhaven’s Maney Miller pitched a complete game and gave up one hit. He struck out 14 Bulldogs and had a WHIP of .29. Miller signed to play baseball at Pearl River Community College and threw some pitches in the 90s mph range.

Smith said it didn’t play as big of a factor in Natchez having one hit.

“They have seen it before in the last couple of games,” Smith said. “If you are throwing 90 on a cold night, it can be hard. We are getting better and progressing at the plate.”