Higgins strikes out nine as Storm get revenge on Bears 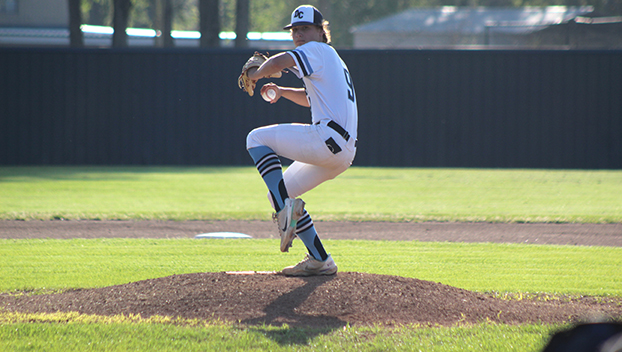 FERRIDAY — Delta Charter came into its game against Block Monday with one thing on its mind. Storm players wanted vengeance for a humiliating 8-3 loss to the Bears two weeks ago in Jonesville.

His defense played flawlessly by committing 0 errors. It is the third game in a row where they have played a complete game without an error. Kennedy had challenged them to make the routine play, and Higgins said they have done so.

“It really helps us out. When your teammate makes an error, it kills the pitch count and brings down the team confidence,” Higgins said. “He challenged us to play with 0 errors, and we went out there and executed. We played DC baseball. We are young, and we have a lot to learn. I think DC baseball is scrappy. We will always fight to the end.”

His mindset coming into the game was to atone for their loss two weeks prior. On the mound, he had to fight like a Bulldog, and it is what he did. All week, he told himself he would shut down the bears. He executed his plan and gave up four hits and one run in the win. His pitch command found the strike zone about 65 percent of the time as he finished the day with 92 pitches and 60 of those being strikes.

“The fastballs were working for me today. I was staying level and pushing off my foot. They couldn’t stay with my fastball, so I blew it by them,” Higgins said. “Once I was ahead in the count, I went to an off-speed to adjust their eye levels and get those strikeouts.”

Kennedy said he has noticed his seniors Chase McGraw, Payten Roberts, and Higgins are stepping up to the task. They are leading their younger teammates by example. Roberts had two RBIs on two hits in the win Monday.

Catcher Will Wiley has stepped up to as a leader. He had one hit and one RBI in the win.  Kennedy said he told the team “tradition never graduates,” by the seniors showing younger players the right way to play.

“We have the word compete on everything we own. I want us to challenge ourselves to give 100 percent,” Kennedy said. “They are competing and playing good ball. They have confidence, and confidence is key. They believe in each other. I’m glad it is coming. We have turned it around.”

‘We won’t sneak up on anyone’ Monterey eyes repeat…