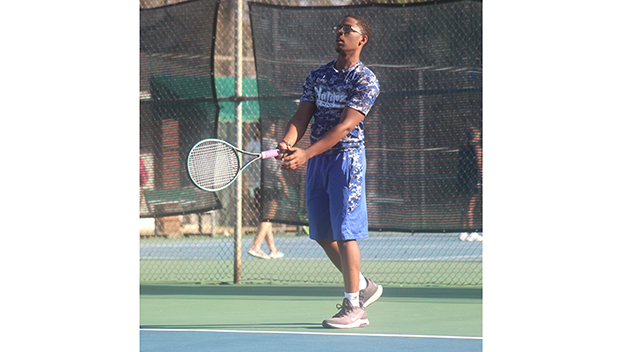 Bulldog senior Donato Miller awaits a serve in a match against Bogue Chitto this year. He said it feels weird to be coming to the end of his high school tennis career. Miller said he has played with the Bulldogs for six years and his teammates since he was seven or eight. (Hunter Cloud | The Natchez Democrat)

VANCLEAVE — Natchez’s season as a team ended Monday afternoon, as the team lost to Vancleave in the first round of the MHSAA 5A playoffs.

Natchez has reached the first round of the playoffs but never managed to get past it in senior Bulldog Donato Miller’s career.

“We have come real close. It’s been 3-4 every year,” Miller said. “When we played Long Beach, I was playing with a senior. I hit a volley into the net. His senior season ended as a team from that. I see now what it feels like. There is an eagerness. I can’t let the time go to waste.”

His playing partner Alexis Woods is a junior who started the year playing with Samaria Spears. The coaches felt Spears played better in singles and Woods would make a good partner for Miller in mixed doubles.

They started playing together midway through the start of this season. Miller said Wood’s dad is always out at the courts and checking on them.

“It feels good to be partnering with someone that I know is their last year,” Woods said. “It’s an honor to play with Miller. For me, it feels good to know I have the strongest chance to go far with him.”

During practice Thursday, she said their goal in Vancleave was to advance. Natchez winning in the first round and moving on to the next would make the team proud and the past teams proud.

Kahari McNeal is looking forward to the individual state championships after missing out last season. For several years, he has watched his sister compete in tennis. His sister Kelsey graduated from Natchez last year.

“I’ve been dreaming of going to state since elementary and seeing my sister play,” McNeal said. “It has been one of the best experiences watching her play with the best people. It has helped me develop, and I have learned how to play better.”

He said a defeat in the opening round of the district tournament last season motivated him. He didn’t want to experience that loss again and advanced to the individual state championships as the district runner-up in boys singles.

Miller isn’t ready to say goodbye yet. He has spent six years playing tennis with the squad. Since he was seven or eight, he played with them in the summer at Duncan Park.

“They are family. It doesn’t feel right to have to leave,” Miller said. “It is weird because I remember all my other years I would see seniors on the team and think it is crazy they are leaving … I’m starting to feel the growing-up process. You realize you have been in grade school for 12 to 13 years. Now it is coming to an end.”