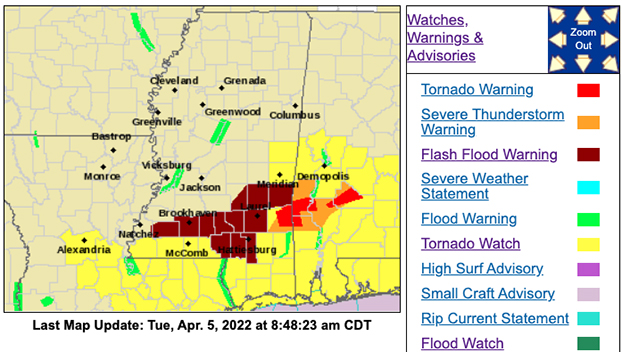 A tornado watch issued by the National Weather Service for Adams County and Concordia Parish has been canceled, however some areas South and East of Adams County should keep a watchful eye out for flash flooding and possible tornadoes.

In Southern Mississippi, a tornado watch remains in effect for Amite, Hancock, Pearl River, Pike, Walthall and Wilkinson counties and a flash flood warning is in effect until 10:45 a.m. in Jefferson Davis, Lawrence, Lincoln and Franklin counties.

According to NWS, drivers should “turn around, don`t drown when encountering flooded roads. Most flood deaths occur in vehicles.”

Flash flooding may impact areas near small creeks and streams, urban areas, highways, streets and underpasses as well as other poor drainage and low-lying areas.