Looking to the future: Cupstid eager to grow, learn role as a Viking pitcher 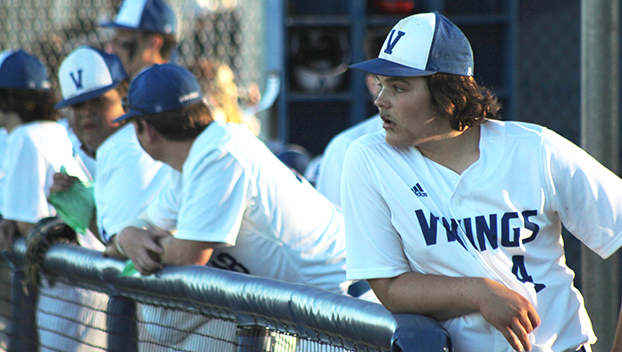 It has been a tough season for the Vikings but Gage Cupstid is one of the bright spots in the program. He had eight strikeouts to help Vidalia beat River Oaks last week and is a sophomore pitcher. Head Coach Seth Thompson said he is eager to learn and has a love for the game. (Hunter Cloud | The Natchez Democrat)

Gage Cupstid was the Viking’s highlight as he led them to an 11-7 win over River Oaks on the mound last Tuesday. He had eight strikeouts in the game.

Cupstid is showing promise on the mound, head coach Seth Thompson said. A sophomore, he started pitching when he was about 10.

“On the mound, I think about hitting my spots and not giving up easy pitches,” Cupstid said. “I make sure I don’t hang my head when someone makes an error. I play mainly pitcher and catcher, so it helps me understand location. You won’t get mad at your catcher. It helps to know where to pitch.”

Coming into this season, Cupstid said he had good off-speed pitches. His goal for this summer is to improve his velocity. If he can get his velocity up, there will be a bigger difference in pitch speed from a fastball to an off-speed pitch.

Pitchers add velocity by working out in the summer in the gym and working on long tosses to improve arm strength. Thompson is bringing a planned out throwing regime for the pitchers including Cupstid. As a team, they are looking to the future during this season.

“You just look forward. You don’t focus on what you did wrong,” Cupstid said. “You learn from your mistakes, and you have to stay optimistic for the next game.”

Ever since he was a kid, he had wanted to be a pitcher and play at the next level. With two more years left, he has a goal of playing in college even if it is not D-1 baseball.

Thompson sees the drive in Cupstid to learn and grow. Thompson said he has a love for the game some kids will lose.

“He is easily coachable and seems to care about baseball. He asks questions, and he is happy to work on his stuff,” Thompson said. “The future is bright for him if he sticks with it. High school kids tend to phase out their love for the game. He still has it. Hopefully, he keeps it. It is a rough year, and hopefully, he keeps it.”