‘I hope we can step up to the plate,’ Seniors pass on the torch to younger teammates 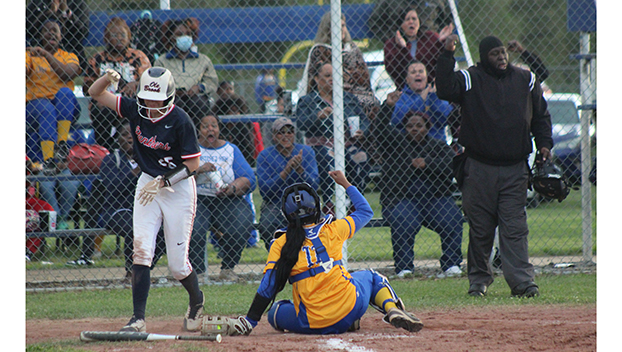 Catcher Ava Reese signals out as the umpire calls a Brookhaven base runner out at the plate to end the first inning. It was one of several close calls in the game Wednesday. (Hunter Cloud | The Natchez Democrat)

NATCHEZ — Brookhaven scored four runs in the eighth inning to win 8-5 Thursday night. Natchez came close to beating the Panthers and was two outs away from winning in the seventh.

The Lady Bulldogs started the game with a series of base hits to score four runs. Natchez junior Ava Reese had an RBI single in the inning, and she finished with three hits on the day.

She said she was focused on the plate and had to be with how noisy the crowd was. Dugouts were chanting at each other several times throughout the game. Natchez’s dugout kept high energy, she said.

“They were very excited after the first inning. I love the girls. They always keep us up and keep cheering us on,” Reese said. “It helps us out. There is no way you can walk in there with a frown. I feel like our home games, we always have good support from the crowd. It is uplifting to have people here encouraging you.”

This year she has put in a lot of work on hitting with her dad and senior Aysia Pollard. The result is she has worked her way up the batting order and is getting better at the plate.

She said she regretted not driving a ball and popping it up. It was frustrating because she had worked on driving the ball and not dropping her shoulder.

Her focus at the plate and behind the plate was crucial down the stretch. There were several close plays, and the crowd was getting rowdy as they went to extra-innings.

“It was very stressful trying to hear the calls from Aysia because we have to sync up,” Reese said. “Sometimes I couldn’t hear her so she had to throw hand signs to me. Focusing and remembering have always been a great thing for me to do.”

Natchez will lose several seniors like Aysia Pollard at the end of this season. Right now, it is a bit of a changing of the guard as the seniors pass on their expertise to the younger players. Reese is a recipient of their knowledge. Her hope is she and her teammates will step it up to close out the season.

“It is scary. We have a lot of seniors on the team,” Reese said. “I hope we can step up to the plate. Hopefully, everyone will be inspired by each other. Next year, there will be eight of us leaving.”