NATCHEZ — Natchez Police arrested a New Orleans man who they believe was involved in a shooting at Holiday Apartments in daylight hours last week.

No injuries have been reported and police say more arrests are expected.

Corey Jackson, 34, has been charged with aggravated assault, possession of a weapon by a convicted felon and discharging a firearm within the city limits. 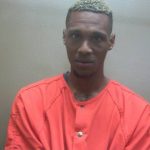 Officers were dispatched to a call about shots fired at the apartment complex just after 9 a.m. Saturday, April 2. There were at least two residents there who said they were inside their apartments when bullets came through their windows, authorities said. At least three vehicles in the area were also damaged by bullets.

Jackson faces a $1,000 fine for shooting inside of city limits and received a bond of $250,000 for the aggravated assault charge while no bond has been set for possession of a weapon as a convicted felon, according to arrest records.