‘This is a drill,’ Full-scale exercise prepares responders for potential emergency 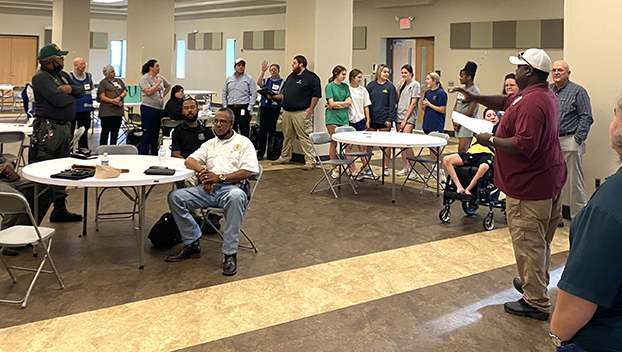 (File photo) Emergency responders in three counties gather at the Adams County Safe Room for a briefing before a full-scale emergency training exercise.

NATCHEZ — There was a lot of commotion at the Adams County Safe Room on Liberty Road Thursday afternoon with the first responders surrounding the building.

Don’t be alarmed though. It was only a drill.

A full-scale exercise played out the scenario of a breach and the Grand Gulf Nuclear Station located in Port Gibson. Every entity from law enforcement and medical personnel to community members and media were participating.

Neifa Hardy, the Liaison Officer with Adams County Emergency Management, sent news stations a CodeRED press release notifying them of the phony breach at the nuclear plant, as she would in a real emergency except it had red bold words across the top.

“The initial scenario was a Grand Gulf breach and they sent out an alert around lunchtime,” she said. “It went to Robert Bradford (Director of Adams County Emergency Management) to say there was an incident. We received another alert around 1:30 saying they were beginning to do an evacuation. Brad called in Emergency Management staff and all of the players for a briefing and we prepared to receive student evacuees from Alcorn State.”

Hardy said the Safe Room was made the reception center, where “contaminated” cars were washed as they entered the property and sent to park in designated spots and civilians were checked out by health departments.

The Steckler Building next door was also set up as a shelter for those who in the scenario evacuated and couldn’t return home.

Other players pretending to be the evacuees were community volunteers and Natchez High School students, Hardy said.

Each step of the process was later reviewed at the Safe Room on Friday morning, allowing the participants to discuss things that went well and ways they could’ve done better.

“Communication is always number one,” Hardy said. “You can always improve on communication. There wasn’t really a mess up of anything but we all said we needed to work on knowing who to report to. … Every department had something to work on internally.”

Hardy said a positive outcome of the exercise was how smoothly new players, including new recruits at the Natchez Police and Fire Departments, did with traffic control.

“An exercise would not be successful if we did not have anything to improve on,” she said. “That is the whole point of it. When we identify things we need to work on, we look at it as a positive.”

CAREER DAY: ‘As long as we make a difference…