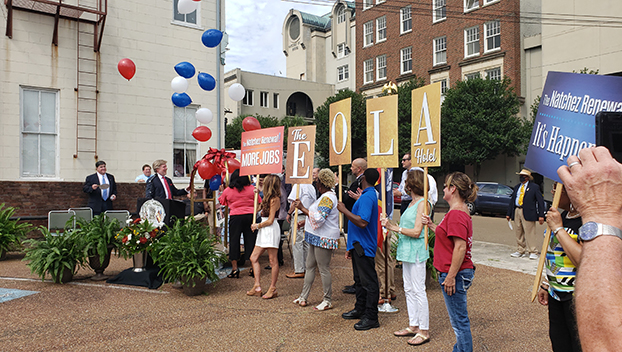 Officials release balloons from a luggage cart original to the Eola on Thursday. (Sabrina Robertson | The Natchez Democrat)

NATCHEZ — Developers who plan to renovate and reopen the Eola Hotel are going back to the drawing board after construction costs have come in about 50 percent more than their expected budget for the project.

Instead of an $18 million project, construction estimates have come in north of $24 million, which does not include the work to turn the city-owned Frey Building into a parking garage.

“I am convinced it is still going to happen, but like everyone, I’m disappointed we were not able to break ground in March,” said Dan Gibson, Natchez mayor. “This is common in the industry right now because construction prices are up significantly and continue to go up, the labor shortage and also the length of time it is taking to get materials ordered and shipped and delivered. We knew this was going to be a problem in December.”

Gibson said developers would need to look at “a new strategy” for the project.

“If you are doing a development like this, you’ve got to make sure you can make money with the project, or why do it? They will be looking at increasing the capital investment by getting more partners but also making sure they can bring a return for those partners, which means increasing revenue. Instead of 70 rooms, they may need to go higher,” Gibson said.

Demolishing the Fry Building and building a parking garage to accommodate future Eola Hotel customers is part of the project.

“Maybe we need to go ahead and tackle (the parking garage) first. This will be a project for the Eola, but also the convention center, which we pay off in 2024 and will want to then renovate and expand. The parking garage is also so important for the increased parking downtown because of tourism,” he said.

The environmental assessment of the Fry Building did show asbestos, which means that asbestos abatement must take place during demolition, but it also makes the project eligible for tax rebates that can amount to 2.5 times the project costs.

“We are starting that process and are also looking at the other development possibilities for the garage, like street-level retail. We know we are going to do that,” he said.

Hayes Dent of Hayes Dent Public Strategies in Jackson is working with the developers of the project.

“We have to rework the capital stack and keep on a timely schedule for Natchez, so we are contemplating separating the garage and the Eola Hotel project,” Dent said. “This project is 100 percent going to happen. We have to change the investment structure to get this thing done. We have several really good options that have come together and we are absolutely moving forward.”

Gibson asks residents to be hopeful and patient about the Eola project, as well as others, like the Depot, which is experiencing similar issues with greatly inflated construction costs.

“Be grateful individuals want to invest millions in our city when all over the globe, development isn’t happening. So many construction projects have been put off because of this economy. But these projects will move forward in Natchez. Hang in there,” he said.

The Dart: Ferriday woman lives life to enjoy it