The Dart: Ferriday woman lives life to enjoy it 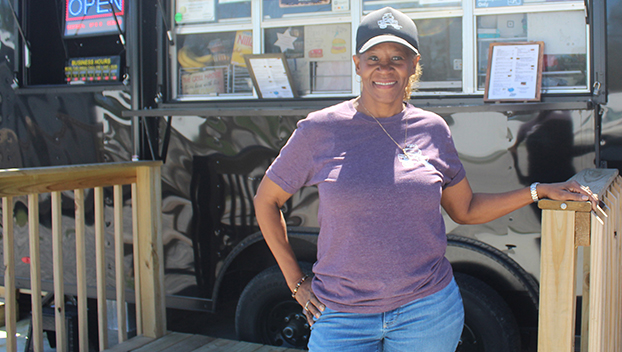 Papa’s Pit owner and interim grill master Lois Davis approaches life with a positive attitude and throws herself full force into opportunities. It is what got her to Houston and working for IBM. She said Papa's Pit is the latest adventure in her life as she enjoys the ride. (Hunter Cloud | The Natchez Democrat)

FERRIDAY — A window rolled up in a black trailer as Lois Davis looked out.

“Hello, how can I help you today?” she said as sweet smoke carried the smell of barbecue into the breeze.

Davis runs Papa’s Pit off U.S. 84 in Ferriday close to where The Dart landed Friday morning.

Davis graduated from Ferriday High School and went to Northeastern Louisiana University, now University of Louisiana at Monroe, where she earned a degree in office administration. She worked for a year at The Natchez Democrat, writing wedding announcements, obituaries, news stories and taking phone calls.

She remembers one time Danny Richardson hung a camera around her neck and had her take pictures in downtown Natchez.

“He taught me different things, but when my brother died in a car wreck I decided I wanted to work for International Business Machines Corporation,” Davis said.

After moving to Houston, she never thought she would come back to Ferriday. At first, she worked at a furniture store in IT, but one day she was sent to IBM by her boss. Once there, she filled out an application.

She got the job and taught people how to use different business software systems. As a kid, she was really good at math and wanted to be a mathematician..

Technology such as typewriters and computers piqued her curiosity. She said her mom brought home a type writer and she learned how to type and got up to 100 words a minute and 120 words a minute in shorthand.

“I set the curve in my classes. I’m one of those people where if I set my mind to something I don’t stop until I achieve it,” Davis said. “I worked for IBM Houston and I went to IBM NASA. One of my fondest memories was spending a month in a camp in Alaska. It was fun and crazy. It was dark, dismal with no lights. There were nothing but trucks, oilfield men and snow.”

While most people drove to work, she flew to her jobs all over the country and the world. She went to the Caribbean, Trinidad and Tobago, Canada and the Dakotas. She enjoyed teaching people how to use different software.

In December 2020, she earned a degree in marketing and decided to come home where it all began.

“I never thought I would return but I saw an opportunity here,” Davis said. “I asked people where they get good food from. I thought of starting a BBQ place and I bought a smoker, a custom food trailer. This is where I started my life and I’m having fun.”

The business opened on July 2. It is named in honor of her grandfather.

Davis is everything at the Pit: CEO, inventory specialist, pit master and cashier. Her brother was the grill master but hurt his leg and is out for a few weeks, she said.

“I’m doing it all but I handle it all by the grace of God. We are still rolling,” Davis said. “If I’m dead and gone tomorrow, my son may spend my money. If I leave him some assets, he will be good. That’s what I’m doing now. I want this whole fence covered with pictures of of the food we will serve and quotes like ‘Our taste outputs the others.’”

Her goal is to have a place for others to come sit and eat all the can. They play music on the weekends and welcome people to hangout.

Her logo is drawn by her nephew. It features a wagon with an old fashioned smoker. The wagon is homage to her grandpa who would load up a wagon with vegetables and drive to Ferriday from the Jonesville Highway, she said.

In the free time she has, she spends it with her four-year-old grandson Jaxon. She is known as “G-Mom” to him. Her life has been good with a few bumps in the road. A lot of the things she has accomplished and undertaken she attributes to her mindset.

“I organize things in my mind and I know the steps it takes. You take one step at a time and it is what I do,” Davis said. “A lot of people make their lives hard because they stress about what they can not control. I accept what comes and I deal with it. I have a positive attitude. How are you going to be successful and be negative.You have to look for the good in everything. I’m going to enjoy life and that is what I’m doing right now.”

‘This is a drill,’ Full-scale exercise prepares responders for…