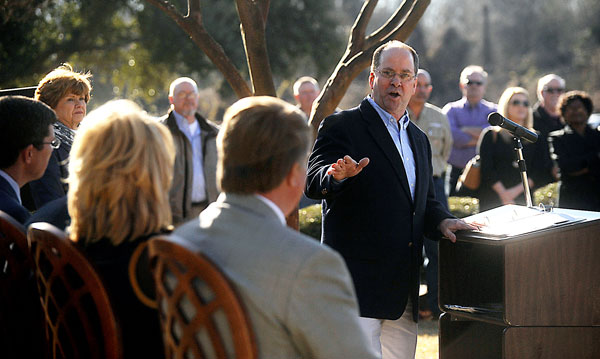 In this photo from 2015, Adams County District 1 Supervisor Mike Lazarus thanks the von Drehle family and company officials for their continued commitment to Adams County. (Ben Hillyer / The Natchez Democrat)

NATCHEZ — Mike Lazarus, who served the residents of District 1 in Adams County as its supervisor for 12 years, is tossing his hat back into the ring.

Lazarus announced on Facebook over the weekend he is going to seek his former supervisor’s seat again in the 2023 election. 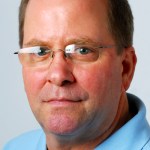 Lazarus was first elected as supervisor in 2007. District 1 Supervisor Wes Middleton narrowly defeated him in 2019 by a margin of 62 votes.

“I enjoyed being a supervisor, and I got a lot accomplished when I was in office,” Lazarus said this morning. “I still get calls from people in District 1 seeking my help.”

Lazarus worked with five different Natchez mayors while in office in order to build a closer relationship between the city and county and was instrumental in the first three phases of the levee work at the old Bellwood Country Club site, he said.

He and his wife Kim operate Lazarus Arts, a business that provides t-shirts, hats and other apparel items designed with custom logos and art.

“I did a lot of good things while I was in office, and I miss it. Kim and I have been in business for 25 years and things are going well with our business, which made me hesitant for a moment, but people still call me for help, and I want to help them,” Lazarus said. “I just want to do it again. I love to help people.”

Lazarus said he did not want to discuss particular issues involving the county at this time, saying there would be time for that during his campaign.

Qualifying for county supervisor begins in January 2023 and the election will be in August 2023.