“You couldn’t script it better than that,” McGruder records final out of his final home game 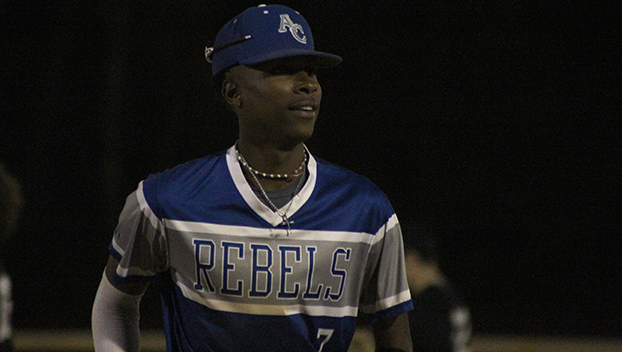 Senior DK McGruder played in his final home game as an ACCS Rebel Monday night. He had one hit, pitched a third of an inning catching the final out and played six positions to close out his career. (Hunter Cloud | The Natchez Democrat)

NATCHEZ — Adams County Christian School played host to St. Aloysius Monday evening and walked off the field smiling with an 8-1 win. It was the final home game for senior DK McGruder.

McGruder played centerfield, second base, third, shortstop, first and pitcher in the game and recorded an out at nearly every one. He pitched a third of an inning in the seventh to close out the game on a soft popup to the mound.

“You couldn’t script it better than that,” head coach Jake Winston said as he jogged onto the field for a post-game handshake.

“It should be a Netflix original,” he said. “The way he got to go out tonight. He has been such an awesome kid to be around and coach. He picks the younger guys up. I was able to get him in at multiple positions. It’s funny how baseball works. He was able to get an out at nearly every position. You can’t write a script better than that. I was glad he was able to be a part of that tonight.”

One of the outs he made was an over-the-shoulder catch against the fence in foul territory. He had covered a lot of ground from first base and got to the ball before the right fielder. McGruder said he knew he would have a chance to play multiple positions.

“It was a great experience to go out and play at every position,” he said.

A transfer from Natchez High School, he played his final season with the Rebels in football, basketball, and baseball. He said he would always be the same DK when he came to AC. His positive energy and smile shone on the bench.

“He is always smiling and gives his best effort. He has a great presence about him,” Winston said. “He is a leader. He works hard. It is a coach’s dream to have a kid with a great attitude. It is a blessing.”

AC pitcher Jack Krevolin had an excellent night on the mound. He threw 6 ⅔ innings. Winston said he filled the zone up and had control of all three of his pitches for nine strikeouts. The defense behind him made the routine play and played an errorless game. Winston said he was proud of the way his team played.

McGruder had a hit in the win and scored on a great base running effort. Rebel Connor Aplin had a great night at the plate with two doubles and three RBIs. One of his doubles had a chance to leave a park but hit the fence in centerfield.

As players left the ballpark, McGruder took time to take pitchers with players and fans. A gift basket filled with snacks and a silver No.7 sat on the field for him. It would be the last time he packed his bag and stepped off the field at AC.

“It’s kind of emotional knowing it’s my last time playing high school baseball on this field,” McGruder said. “It has been great. I have made a lot of close friends here. It’s been good. I really like AC. I just try to come away with a dub in these last few games. I feel like we came together. We trust each other, and we have each other’s back.”

The two teams will play in a doubleheader Wednesday if the weather permits.