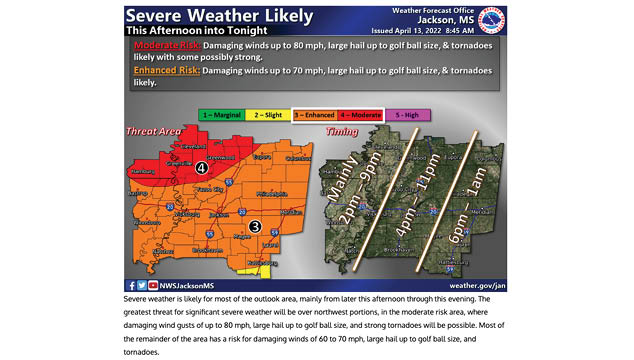 NATCHEZ — The Miss-Lou area is under a tornado watch until 9 p.m. tonight.

“It’s hard to say exactly when the storm will have moved through. We have a line that will push through, but we also have the possibility of discreet cells associated with that line,” Elkins said.

In contrast, the forecast for Thursday in the Miss Lou calls for sunny skies and calm winds with a high near 75. Thursday night is expected to be mostly clear with a low around 51.

Friday should be mostly sunny with a high near 81. Friday includes a 20 percent chance of showers and thunderstorms after 2 p.m.

Showers and thunderstorms are likely on Saturday with an expected high of 82 degrees. Sunday will be mostly cloudy with a high near 80 degrees and a 40 percent chance of rain.