Water rate increase likely for most in city 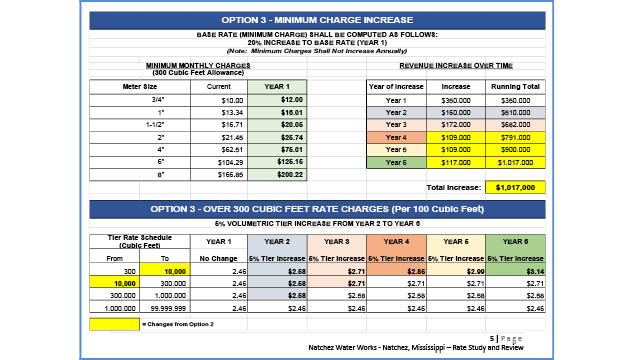 NATCHEZ — It’s been 15 years since Natchez residents who pay the base rate for water and sewer in Natchez had an increase. It’s been 11 years for everyone else who buys Natchez water.

Tony Moon, Natchez Water Works superintendent, laid out a plan for the Natchez Mayor and Board of Aldermen at its Tuesday meeting that will increase water rates here, something Moon said cannot wait any longer.

At a Board of Aldermen meeting on March 22, Moon said costs of equipment, manpower and providing services have increased to the point where a rate increase is necessary.

“We are a business and no successful business can continue to go on and not have to raise the cost of goods. This should have been brought to you all sooner, and that’s my fault. Things kept happening to make use push this down the road. The pandemic was an obvious one. And our 2021 was more challenging than our 2020,” Moon said at the board’s March 22 meeting. “It’s come to a time that something has to be done.”

Moon said he and others at Natchez Water Works and consultants have been working for many months on the best, most palatable way to raise water and sewer rates here.

“(We) tried to look at inflation and easing into the rate increase. Hopefully, inflation will be settling down in the months ahead. I know every household is not in the same situation. Some are struggling more than others. We tried to make this as fair and spread it out as best we could,” he said. “What you have to understand is it took us months and months to come up with this plan. It is not something we rushed into.”

If approved by the Board of Aldermen, the base ratepayers who use fewer than 300 cubic feet of water per month would see a $2 per month increase for water and a $2 increase per month for sewer beginning on July 1. That’s a 20 percent, one-time increase when considering water and sewer. Base rate payers make up 38.5 percent — 2,671 users —  of the city’s total 6,939 residential, business and industry connections. This group would not see another increase during the six-year transition period.

“They would be one and done,” Moon said.

At present, the 84 largest water users in Natchez pay 36.3 percent of Natchez Water Works annual revenues. These customers include hotels, some restaurants, car washes and industrial and manufacturing businesses.

For 83 of those  — 1.19 percent of the total current users —a 10 percent increase will be added over a two-year cycle.

Currently, the city has only one customer that uses more than 300,000 cubic feet of water per month. That customer would see a one time increase of 5 percent in year two.

The Board of Aldermen voted to take the issue under advisement and digest the information between now and the next city meeting, scheduled for Tuesday, April 26, at 6 p.m. at the Council Chambers on South Pearl Street, across from the Natchez City Hall.