‘I know I won’t be able to come back and play on this field again’, Senior reflects on final moments with Bulldog squad 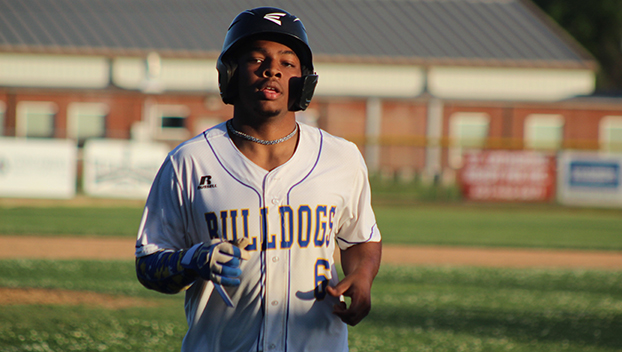 Natchez senior Roderick Simpson runs off the field after being stranded. He had a hit in a game against Brookhaven High School Thursday night. It is one of his final home games at Chester Willis Field. (Hunter Cloud | The Natchez Democrat)

NATCHEZ — Bulldog senior Roderick Simpson hugged a few guys on the Brookhaven squad and made his way across the diamond Thursday night. Natchez had lost 12-3 to Brookhaven in a game where they showed fight and cut the lead down to 6-3 in the fifth inning.

The Panthers scored six runs in the final two frames to earn a win and move a step closer to winning a district title outright. Natchez Head Coach Dan Smith applauded their efforts.

Ole Brook had to bring in its ace Maney Miller to close out the game, and he slammed the door on the Bulldogs. Simpson gave his team a shot at winning the game by throwing six innings of work. He would finish the game with 129 pitches and four strikeouts.

“I told Dan I wanted to throw, put me on the mound,” Simpson said. “It is my last game against those boys. It has always been a rivalry to me. They have a good team. Some of those guys are kind of cool too. I had confidence on the mound.”

He is routinely the oldest player on the field with a squad of eighth and ninth graders. He said it is unusual for a varsity squad to have few varsity players.

This season, they have worked hard to rebuild from a squad that won the district title last season. There is a bright future ahead for Treylon Minor, Jwun Mackey and Mason Bouldin.

Simpson said he sees potential in the young team, and he is hard on them at times. He hopes to see them all succeed.

Mississippi Valley State University is his likely landing spot as he is committed to playing baseball there. He said if it requires him to take a role as a bullpen catcher to get his foot in the door he will do it.

Itta Bena is three hours from Natchez, but the environment is nice, he said. The coaches there gave him a chance when other colleges wouldn’t.

His plan for college is to study welding, so even if baseball doesn’t work out, he has a backup plan.

“I’m going to miss everything and Natchez as a whole. Your four years go by fast. I took a few of those years as a joke, but it started hitting me at the end of my sophomore year ‘I don’t have much longer,'” Simpson said. “I know I won’t be able to come back and play on this field again… I’m at a loss for words. You play youth league and work your way up to 12th grade. I probably won’t put down a baseball ever. I love the coaching staff here. Although it was a rough season, I still had fun with them.”

Natchez track finishes fourth as a team in regional…