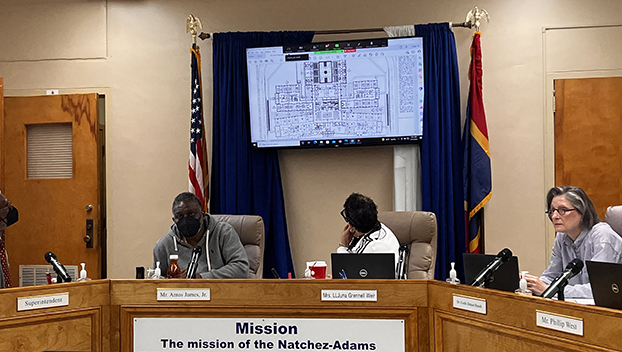 The Natchez Adams School District Board of Trustees on Wednesday receives an update on construction work on a new high school and renovation of the existing high school for what is to be a middle school. (Sabrina Robertson | The Natchez Democrat)

NATCHEZ — Construction of a new high school adjacent to the existing Natchez High School campus is visibly coming along. However, after weather and shipping delays, the project’s projected completion date isn’t until Oct. 26, project supervisor Marco Gonzales told the Natchez Adams School District Board of Trustees during a Wednesday meeting.

He added the renovation of the existing high school, which would later be used as a middle school, could be finished in August just in time for school to start.

“I’m pushing to be finished so that you can be using the school for the beginning of the school year,” he said.

The renovation includes building new and updating old bathrooms, updating the school’s HVAC system and adding doorways that open to the inside of the building to limit the need for students to walk around outside for safety reasons. Each room is also getting LED lighting and fresh floors so the classrooms will look better and, more importantly, students can see better, he said.

“One of the immediate responses we’re getting from the students when we put in these new lights is, ‘I can see,'” Gonzales said.

Where middle and high school students classed are housed at the start of the next school year is riding on the project. With uncertainty about when it will be finished, officials said they haven’t decided yet where students will be placed.

With construction costs going up nationwide, the project has still managed to stay within budget, but just barely.

The board approved more than $142,000 worth of change orders Wednesday, which is a balance of some cost-saving changes and price updates for several items including door signs for classrooms, a scoreboard for the gymnasium, outlet and data plugin areas for the cafeteria, hand dryers for the bathrooms and gas line trenches for the science lab.

Elementary and Secondary School Emergency Relief (ESSER) Fund grants enacted by the CARES Act could cover the cost of more than $3 million worth of updates to HVAC systems and bathrooms, which are a large part of the renovation at the existing high school.

“We’re in good shape if we get all of the ESSER. If not, we’re going to be hurting,” Gonzales said.

There are three levels of ESSER allocated to the school district on a cost-reimbursement basis.

Approximately $2.4 million had been allocated to NASD in ESSER I, $9.8 million in ESSER II, and just under $22 million is expected in ESSER III. To date, school officials said just under $300,000 remains in ESSER I while the grant ends Sept. 30, at which time any unspent funds would remain with the state unless an extension is given.