The Dart: Athletic Trainer happy with time in Natchez 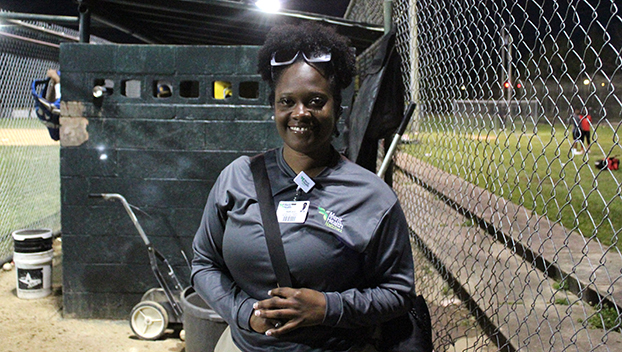 Merit Health Athletic Trainer Kayla Gilmore on the sidelines at Natchez High School late in a game against Brookhaven High School Thursday night. She is a Natchez native and played softball in school. Her plan is to stay in Natchez for a while. (Hunter Cloud | The Natchez Democrat)

NATCHEZ — A foul pitch struck Natchez catcher Cameron Craft in the groin, and he crumpled to the ground Thursday evening. Athletic Trainer Kayla Gilmore rushed from the side of the Bulldog’s dugout at Chester Willis Field to help Craft.

A Natchez native, Gilmore can be seen perched in a chair at the front of the grandstand or in the dugout at baseball games. She is an athletic trainer for Adams County Christian School, Cathedral, and Natchez High School and is on the sidelines of many different sporting events.

Gilmore graduated from Trinity and attended Holmes Community College, where she played softball and started a major in athletic training. At Southern Mississippi, she earned a bachelor’s degree in May 2020.

“I wanted to become an athletic trainer because I had played sports my whole life,” Gilmore said. “When I got to middle school, I was interested in the sports medicine team on the sidelines. I wanted to do it, and I never stopped working towards it.”

She started playing softball when she was four years old and played until she got to USM. Athletic training was so demanding that she stopped playing.

Her time as a softball player helps her with giving aid to athletes. She said she is familiar with sports and uses her experiences and education to care for any injuries.

She lived in Starkville and had an internship at the Mississippi University for Women in Columbus before moving home to Natchez to be closer to her mom. The job at Merit Health came open, and she took it.

“It all fell into place,” she said. “I think about the nurses we had in school. She was always there. The relationship I had with her, and the ones I had with my coaches, were the best. I tie it into my medical work. I can be their counselor and nurse, and coach in one. It allows me to stay closer to sports.”

People sometimes think athletic trainers are like personal trainers, she said. While she can give exercises to people for them to do, her job isn’t to go through workouts with people like a personal trainer.

Instead, her job is to be the medical assistant on the sidelines. She acts as the first line of defense if anything goes wrong during a sporting event. She said she had not seen anything too drastic besides concussions in her first year as a trainer.

Outside of the ballpark, she is in the process of getting her master’s in teaching and wants to get other certifications under her belt. Anything she can get to help her with the job, she said. Reading is another passion of hers.

“Retail therapy is the best therapy. I’m an online shopper. I don’t like to go in and walk through a store,” Gilmore said, adding her plan is to stay in Natchez. “I have enjoyed everything here. I plan on staying here for a while. I’ve been happy.”

ON THE MAP: Natchez runner aims to put Mississippi…