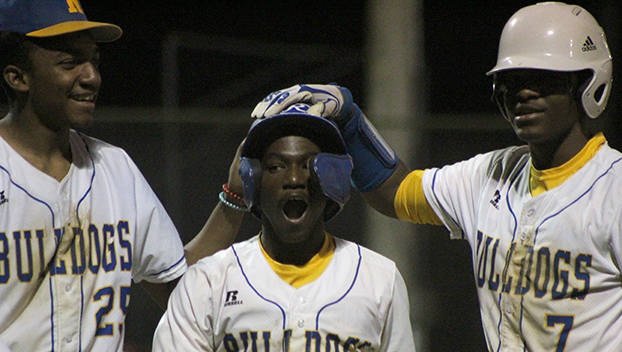 Natchez will host Vicksburg Tuesday for its senior night after rainouts cancelled three potential games. From left, Bulldogs Cameron Craft, Jaylin Davis and Jessie Grayson walk off the field in a game against Bogue Chitto. Davis was thrown out at home plate in a close play. (Hunter Cloud | The Natchez Democrat)

NATCHEZ — Natchez High School’s junior varsity and varsity baseball teams were scheduled to play three games over a four-day stretch starting last Saturday at Port Gibson High School. Unfortunately, the recent bouts of severe weather that have plagued much of central and southwest Mississippi put a screeching halt to that.

And not only have the players on both the Bulldogs’ JV and varsity teams been disappointed in having these season-ending games canceled, so has head coach Dan Smith.

Even though Natchez High finished fourth in MHSAA Region 5-5A and will not make the playoffs, they wanted to finish off the season strong against the likes of Port Gibson, Franklin County High School and Raymond High School.

However, those plans have been thwarted. The Bulldogs were scheduled to play at Class 4A Port Gibson for a JV game at 11 a.m. and a varsity game at 1 p.m. Saturday. But Mother Nature had other ideas.

“It rained up there Friday night and most of Saturday,” Smith said. “So those games were canceled.”

And if that wasn’t bad enough, Natchez High was scheduled to host longtime nearby rival Franklin County for a JV and varsity tilt late Monday afternoon and then host Raymond for a JV and varsity game that was supposed to the Bulldogs’ Senior Night game on Tuesday. Yet those games were also canceled.

Smith said he found out last Friday that those games were canceled by way of a text from athletic director Alphaka Moore.

“They were kind of upset. But I told them with the weather you can’t have any control. There’s nothing you can do about it,” Smith said.

However, there may be a glimmer of hope as it pertains to a potential Senior Night opponent for Natchez High.

“Franklin County had a make-up (Region 7-3A) game. Raymond had to cancel because they had to make up (Region 6-4A game),” Smith said. “We’re waiting on Vicksburg (High School) to call back today (Monday) about playing Tuesday for an official Senior Night game. We want to officially send our seniors out.”

And that glimmer of hope became a reality late Monday morning. Natchez High will host Vicksburg with the JV game at 5 p.m. and the varsity game at 7 p.m.

“I’m happy we’re going to have a Senior Night for our seniors,” Smith said.