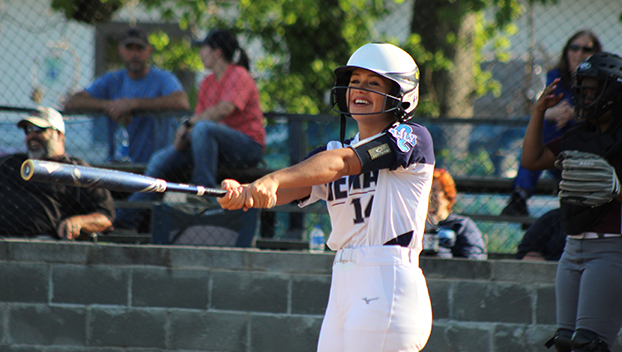 Delta Charter senior Sophie Cooper smiles as she looks over to her Head Coach Jeanie Crnkovic during a practice swing. The Storm won 16-0 to advance to the second round of the LHSAA playoffs. (Hunter Cloud | The Natchez Democrat)

FERRIDAY — Delta Charter made quick work of Sicily Island in the first round of the LHSAA 1A playoffs Tuesday afternoon. They needed just one run of the 16 they scored to beat Sicily Island.

Sydnee Burns was three for three for Delta Charter with three RBIs in the win. A junior, she was responsible for a quarter of the Storm’s 12 hits.

Two of her hits were for extra bases as she bagged a double and a triple. Burns said she had just one goal in mind when she stepped up to the plate.

“My goal was don’t strike out. Don’t embarrass yourself,” Burns said. “I’ve been through a slump for the longest time. My friends knew how to cheer me up. They told me it is fine and you will get out of it. I really appreciate them.”

She said this season she learned to work hard, have a good attitude and be nice from the team’s seniors Sophie Cooper and Jaden Boydstun. Additionally, she learned Cooper does a great job of braiding hair.

Cooper had a strong game going two for two with three RBIs. She had a stolen base, a home run and an enthusiastic smile in the team’s runaway victory.

“We have the opportunity to go to state, so I’m pretty excited,”  Cooper said.

Her career is winding down like many others across the Miss-Lou. Northwestern State University in Natchitoches is her next planned stop, where she will earn a masters in nursing, she said.

Unless she is able to join a slow pitch softball league, the playoffs will likely be her final softball games. Then it will be onto adult life, she said.

“It is very sad for me. Softball is something I came into later in life,” Cooper said. “I found a love for it through Jeanie. I’m sad it is coming to an end. These girls are my family. It is sad. I have been throwing partners with Jaden since we were nine.”

Boydstun had a home run in the game as she blasted a pitch over the right field wall. It was gone when it left the bat. She said she just tried to hit it somewhere.

She will head to South Arkansas Community College to play softball. Her major will be an associates in art.

“My travel ball coach knew the coach there. She wanted me to come there,” Boydstun said. “She is young but also an old soul. All of my friends are going to SouthArk. It is perfect for me.”

Delta Charter plays at Oberlin Thursday, and if they advance, the girls expect to play against LaSalle, who would need to beat Gueydan in the second round.

A third round game would be played on Friday with a short turnaround from Thursday’s game. The short rest is due to Prom being on Saturday, Cooper said.

“We are young, so if we win the second round, it will be a big confidence boost,” Cooper said. “If we play LaSalle, the last time we played them, we hit the ball well. This is the best hitting team I have been on. It will be exciting if we can make it to the semifinal round.”