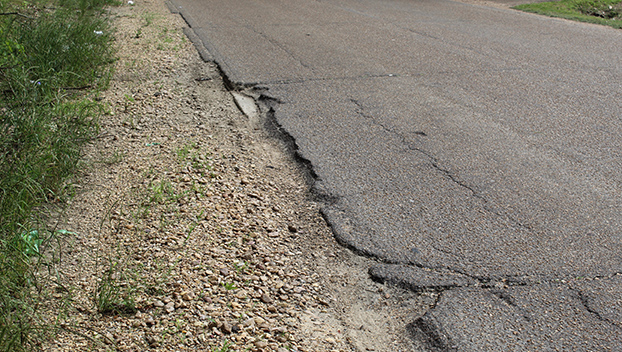 The edge of the pavement on Morgantown Road is cracked and has poor drainage for when it rains. (File photo | The Natchez Democrat)

NATCHEZ — Morgantown Road got approved for $2.4 million included in a $1.5 trillion bipartisan spending plan signed by President Joe Biden last month, however, IMS Engineers estimates that is still shy about $2.3 million needed to complete the road widening and resurfacing project.

George Ford of IMS Engineers updated the Adams County Board of Supervisors Monday on the project, which he says could cost approximately $4.5 million to complete after factoring in inflation and engineering fees. The project, which entails widening the dangerously narrow road and digging drainage on either side to stop frequent flooding issues, was previously estimated to cost approximately $3.3 million.

The project has been in the works for at least two decades. Both Natchez and Adams County officials have worked the last few years to find ways to fund the badly needed improvements to the road ever since state funds fell through.

Now that it’s approved in the infrastructure bill, the $2.4 million would first flow to the Mississippi Department of Transportation which would release the funds to Adams County when available.

Supervisor Ricky Gray, who has been outspoken about the project from the beginning, asked whether it could be submitted again for state funding.

“Can we mingle federal funds with state funds in order to do this project?” he said.

Gray briefly mentioned using bond money for Morgantown Road, which the county would have to repay. The board intends to take out a $5 million recreation bond, which officials said would first be used on updating the Natchez-Adams Softball Complex and county parks with the remaining funds used for road projects.

However, officials agreed to follow a “four-year road plan” supervised by Adams County Road Manager Robbie Dollar when doing the road projects so that roads from each of the supervisors’ districts are given attention.

“We may not have to look at borrowing,” Supervisor Angela Hutchins said, adding matching grants could be supplemented through the Delta Regional Authority.

“The DRA has money out there for matches. You can use this match money to do these projects without borrowing and people just aren’t dipping into it. We need to start submitting applications. There is so much funding out there that we’re not tapping into. We should not be coming out of our pockets or the pockets of our constituents when there is this kind of funding out there,” she said.

“I’m disappointed that we’ve been fighting for Morgantown this long and our other engineers knew that 2.4 million wasn’t going to be enough to complete half of Morgantown Road and haven’t said anything about it,” Gray said.

Supervisor Warren Gains said lack of correspondence from JKS has been “an ongoing thing.”

“They (IMS) can’t properly do their job without getting what they need,” Gains said before asking Attorney Scott Slover if the board could do anything “to make sure those documents are turned over.”

Slover said he could hold paychecks for JKS and exchange them for the paperwork.

“We’re not giving them a paycheck until they give us what we need,” he said. “We have to make it a priority for them.”

Hayden Kaiser III of Jordan Kaiser and Sessions said Monday afternoon that he knew about the paperwork that the county was asking for but declined to comment any further.