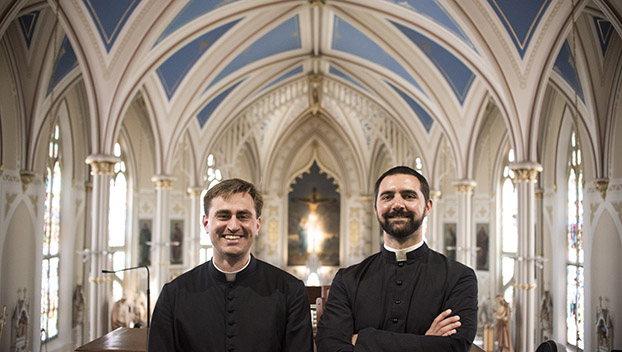 NATCHEZ — Mother’s Day is the last Sunday that the Rev. Mark Shoffner will serve as parochial vicar at St. Mary Basilica before he is reassigned to Oxford, he said.

Shoffner’s official start date at the St. John the Evangelist Catholic Church, located a short distance from the University of Mississippi, is May 12.

Replacing him is the Rev. Aaron Williams, another native Mississippian who Shoffner says he knows well from his days in seminary. Williams’ first assignment was in Shoffner’s hometown of Greenville, Shoffner said.

“It’s going to be a good thing,” Shoffner said of Williams coming to St. Mary Basilica. “I’ve known him since 2012. He had been in seminary in the same class I was although I was ordained a year after him. He’s another native Mississippian who just turned 30 and he’s very accomplished and smart. … He’s a good friend. His first assignment was up in Greenville where I’m from. There is no one else I would rather entrust something special to me because I know he’s going to do his best to take care of it.”

Shoffner said he looks forward to seeing what Williams will accomplish at St. Mary Basilica.

“It’s a good time to be at the Basilica and with his knowledge and with his skillset I’m interested to see what good things are going to happen here,” he said.

One of Williams’ tasks will be helping Cathedral School find a new lead administrator to replace Jessica Carter, who announced last week she is resigning from that post at the end of the school year.

Shoffner said he is looking forward to traveling to a new place. He said he has never had the opportunity to visit Oxford in the past.

“I’m excited. That is the beauty of being a Mississippi priest is you get to go to different places. … I look forward to having a lot of interaction with young families and university kids that swell the parish. It’s going to be interesting to be able to work with young people when they’re making those big life decisions and help guide them.

“You can’t get any closer to the university than where the church is in Oxford. You’re close to the campus and can walk through the grove and minister on campus.”

Shoffner said he is also looking forward to seeing familiar faces from other cities in Mississippi where he has lived.

“There are so many people that go to Oxford,” he said. “I’m looking forward to seeing familiar faces from different cities and places I’ve lived. I know people from Natchez to Crystal Springs to Jackson to Starkville. I’m looking forward to talking up Natchez and getting a bus group to come here.”