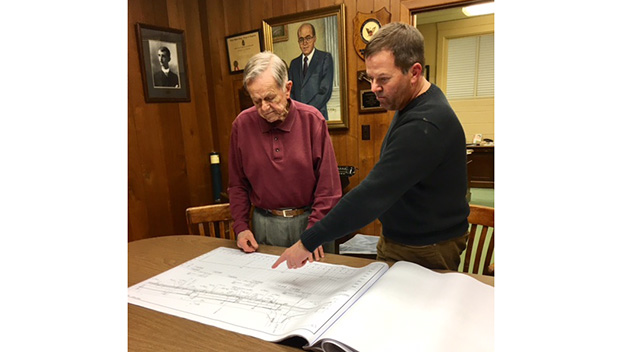 Hayden Kaiser III, right, and his father, the late Hayden Kaiser Jr. of engineering firm Jordan, Kaiser & Sessions, review plans for the reconstruction of Morgantown Road back in December of 2017. (File Photo)

For nearly two decades, the county has been at work on plans to widen and resurface the road and dig the necessary drainage to prevent it from flooding. After a lengthy process of obtaining legal rights of way from private property owners along the road, officials are still discussing ways to fund the project.

During Monday’s meeting of the Adams County Board of Supervisors, George Ford of IMS Engineers estimated the project would cost approximately $4.5 million.

The Adams County Board of Supervisors hired IMS to replace JKS in January last year.

“I’m disappointed that we’ve been fighting for Morgantown this long and our other engineers knew that 2.4 million wasn’t going to be enough to complete half of Morgantown Road and haven’t said anything about it,” Supervisor Ricky Gray said during the meeting.

Kaiser sent an email to officials Wednesday and copied The Natchez Democrat addressing the difference in the cost estimates and the documents.

Kaiser said the last estimate JKS gave to the board on May 4, 2020, shows a total construction cost of $3.26 million, “which doesn’t include engineering or other related costs.”

“IMS’s construction estimate of $4.5M could possibly be substantiated due to increasing costs since May 4, 2020. I am willing to work with the Board, but I suggest they get their facts straight before making public statements lambasting JKS, and for that I expect a public apology.”

Kaiser also stated his office left a voicemail and email for Ford last Thursday informing him they would not have the bridge inspections ready to give to him until the middle of this week.

In the email, he claimed the county still owed more than $300,000 to JKS for the Morgantown Road project.

“JKS has re-designed Morgantown Rd 3 times for 3 different Boards of which I have over $300K in WIP for which I have not been paid,” the email states. “I had a long talk with Harry Lee James, State Aid Engineer, this morning.  He stated that our work is considered ‘intellectual property,’ it belongs to us until we are paid for our work, I’m not going to hand it over to anybody without an agreement in place.”

On Monday, officials instructed the board attorney Scott Slover to withhold sending checks to JKS for unrelated work until the needed paperwork is handed over.

“Holding payment on other unrelated jobs is unsubstantiated and completely unfair.  I have to pay employees wages that actually live in this community,” Kaiser said.

Kaiser’s claim that the county still owes over $300,000 for Morgantown Road is a “complete shock,” Slover said.

He asked the county administrator Angie King to go over all of the county’s payments to JKS on the Morgantown Road project and would review if any invoices were unpaid.

“My understanding is that we’ve paid all invoices on it,” he said. “I don’t think what we are doing is unjustified. … The county has always paid its bills. We’ve been very patient with JKS. That patience has run out.”