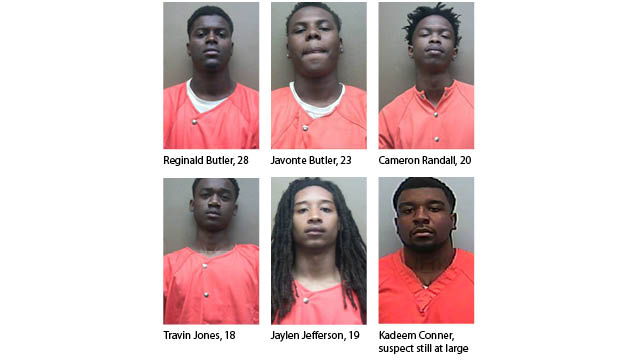 Deputies responded to a call of shots fired at 109 Red Bud Lane Saturday. After investigating, it was determined at least 20 rounds were fired, hitting two different houses and two different cars in the area, Adams County Sheriff Travis Patten said.

The Sheriff’s Office investigation led to the arrests on Tuesday of five suspects. A sixth suspect, Kadeem Conner, is still on the loose.

Deputies from the Special Operations Group arrested Reginald Tyrone Butler, 28, and Javonte Lamar Butler, 23, who have been charged with shooting into an occupied dwelling and drive by shooting.

Also arrested were Cameron Joel Randall, 20, Travin Jamel Jones, 18, and Jaylen Eleighajuan Jefferson, 19, all charged with shooting into an occupied dwelling and shooting into a motor vehicle.

Conner is being sought for shooting into an occupied dwelling and drive by shooting.

“Our investigators did a great job making arrests quickly,” Patten said. “We have received several reports in reference to shootings in the area of Myrtle Drive and Red Bud Lane. We have been asking neighbors to take back their neighborhood by installing security cameras and giving us access to those camera. Several of those neighbors have actually done that to help us. That has helped us make quick arrests and bring closure in this case.

“We encourage other citizens to do the same. We now have cameras all up and down those streets in that area. You are more than likely to be caught on several cameras in that area and if we see you involved in illegal activity, we are going to arrest you. Period,” Patten said.

Adams County Sheriff’s Deputies ask residents who may see Kadeem Conner, who is still at large and a suspect in the April 16 drive by shootings, to please call 911 or the sheriff’s office with his whereabouts.