‘It all comes to an end eventually,’ Vikings look back on a season cut short, ahead to new chapter 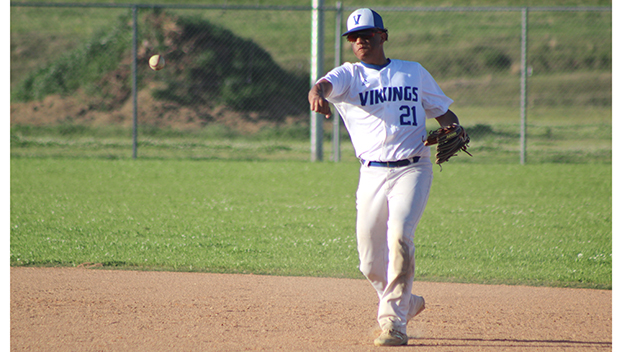 Viking senior Tyrin Jordan makes a throw from second base to first. He isn’t sure what the next chapter will be like when Vidalia plays its final games of the season. (Hunter Cloud | The Natchez Democrat)

VIDALIA — Viking baseball seniors Tyrin Jordan, Nate Tatum, and Braden Goldman know their careers are nearing the end. It hasn’t been a pretty season for Vidalia as the young team is rebuilding.

Beekman Charter took five innings to beat the Vikings 18-4 Monday night. It was a defeat similar to what Jordan, Tatum and Goldman recall was one of the last games they played before COVID. They lost 1-0 and 4-0 to Thibodeaux after a two-and-a-half hour bus ride.

“We were going to play Cathedral that Friday. We went to get food, but our principal called us back and said school and the games were canceled. We were confused,” Jordan said.

According to the LHSAA website, Vidalia had four games on the schedule for the 2020 season, but district play had not started. A 6-0 loss to Grace Christian on April 11, 2020, was the last game they played that season.

Tatum remembers the mood in the school as COVID grew as a global issue. They would watch CNN 10, a digital news show designed for classrooms, where the news discussed the pandemic.

“We never thought it would get serious,” Tatum said. “School was shut down until like the end of May. It ended up being the longest summer ever. I was looking at the group chat the other day and reading what the seniors and team were saying. We were still hopeful. The LHSAA hadn’t officially said it was over. They finally broke the news, and we couldn’t do anything organized.”

It was a long summer for Jordan. He said he spent much of his time “chilling in the crib and playing MLB The Show.” Tatum and Goldman said they had a great summer even if the rest of the world was closed down.

Two years later, the trio’s senior season is about to come to an end. Vidalia has its third coach in three years and possibly only four games left.

“It is going to hurt,” Goldman said. “I’m going to miss the sport I love. I have played since t-ball. I’m going to Mississippi State University for Mechanical Engineering, so this is the end for me.”

Tatum quipped he should walk on to the Mississippi State baseball team. “I’ll be a BPCO, bullpen catcher only,” Goldman said. Tatum plans to go to college and the military after graduating from Vidalia High School. The University of Louisiana Monroe and a degree in respiratory therapy are next.

Jordan doesn’t know what is next after they play their last games together.

“It is going to be hard. I grew up with all of these people. It will be hard to leave it all behind,” he said. “I don’t know what is next yet. I’ve been thinking about mechanical engineering or maybe welding.”

Tatum said the end of his high school career would be bitter-weet. After his final high school game, there will be no more baseball to play.