Senior walks it off for Green Wave over Cougars 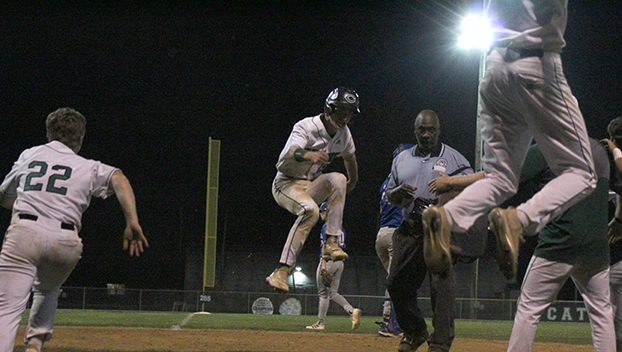 Zeke Flattmann was the game winning run driven in by fellow senior Tyler Gregg. He jumps in the middle before being mobbed by his teammates as Cathedral won on a walk off double 4-3 over Brookhaven Academy. (Hunter Cloud | The Natchez Democrat)

NATCHEZ — Cathedral was down to its final out when Brookhaven Academy’s pitcher struck Jake Harriston and Zeke Flattmann to put two men on base. Senior Tyler Gregg stepped up to the plate and had a 1-1 count before he seized the moment to deliver a 4-3 win.

On a fastball left a little high, he roped a line drive down the right-field line where it got under the glove of the right fielder. Pinch-runner Jacob Smith belly-flopped on home plate, and Flattman scored with ease.

“Tyler did all the work, I just got on base and ran. I was hurting and wheezing when I rounded third,” Flattmann said. “Andrew said it was easy, but I was still sprinting. I was so happy. I had chills.”

He jumped in celebration with his teammates as hats, gloves and batting helmets flew into the air. The entire team then shifted its focus to the senior night hero, Gregg.

A horde of Green Wave players charged at him across the diamond. He stood on second base with his hands held high and a grin.

“I was kind of scared. I thought I was going to get thrown over the fence. I was a little nervous with the cavalry coming after me,” Gregg said. “I couldn’t think of a better way to end my senior night htan to hit a walkoff double.”

The game had four lead changes and two starting pitchers who tossed 6.2 innings. Mason Moore came in relief for Noah Russ and got the final out in the top of the seventh. Cathedral gave up three hits on the night.

Green Wave batters got just four hits on the night and senior Harper Jones stole the only base.

Cathedral will take on Brookhaven Academy four more times this season including a playoff series.. He said every game should be close.

“It feels great to get the win tonight. We came out here, and our pitchers dominated, and we had good hitting. It was a good game all around,” Jones said. “We will play them four more times. We will be competing like this every night. It will be fun.”

Three Lady Bulldogs walk off field together one last…