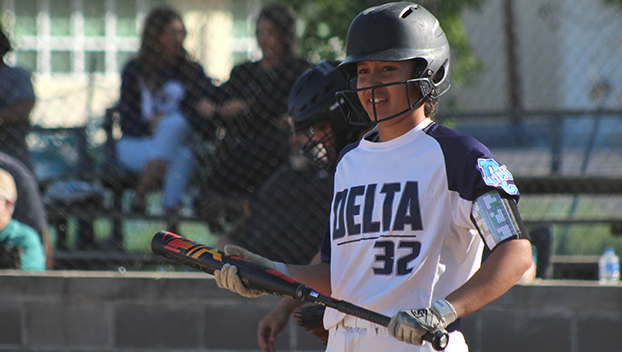 Junior Sydnee Burns went 2 for 3 in the Lady Storm’s loss to Oberlin Thursday afternoon. The Lady Tigers mounted a rally in the sixth inning to win 7-3 and eliminate Delta Charter from the LHSAA playoffs. Burns will return next season for the Storm. (Hunter Cloud | The Natchez Democrat)

But after holding Oblerin to just one run over those first five innings, Boydstun had trouble finding the strike zone and that allowed the Lady Tigers to put up a six-run rally in the bottom of the sixth inning for a 7-3 win over the Delta Charter Lady Storm.

“They (Oberlin) got their hits with a couple of walks mixed in,” Lady Storm head coach Jeannie Crnkovic said. “The girls played hard, even in the seventh. We put the ball in play, but we couldn’t score.”

The Lady Tigers’ game-changing rally in the bottom of the sixth wasn’t the only factor in the outcome of this win-or-go-home playoff game. So was the big difference in the amount of runners left on base by each team.

“We left 11 people on base. They left four people on base. We out-hit them, made fewer errors, and the strikeouts were about the same. That was the difference in the game right there. So there you go,” Crnkovic said.

The game was scoreless after three innings of play thanks to what was for most of the game a pitchers’ duel between Boydstun and Oberlin’s Emma Johnson. Then the Lady Storm struck for three runs off Emma Johnson in the top of the fourth inning.

And even after the Lady Tigers responded with one run off Boydstun in the bottom of the fourth to make it a 3-1 game, it looked like that lead was going to hold. That was until the bottom of the sixth inning happened.

Delta Charter had nine base hits while Oberlin had just five hits. The Lady Storm committed just one error while the Lady Tigers committed two errors. Boydstun’s 11 strikeouts were countered by Emma Johnson’s 10 strikeouts and just one walk.

“Having only error was huge for us. They put the ball in play, so we had to get them out,” Crnkovic said.

Sophie Cooper went 3-for-4 with a double while Sydney Burns and Kayven Atwood each went 2-for-3 and Ally Atwood was 2-for-4 to account for all of the Lady Storm’s base hits. C. Johnson had a two-run double in the bottom of the sixth for the Lady Tigers.

Delta Charter finished its season with an overall record of 8-17.