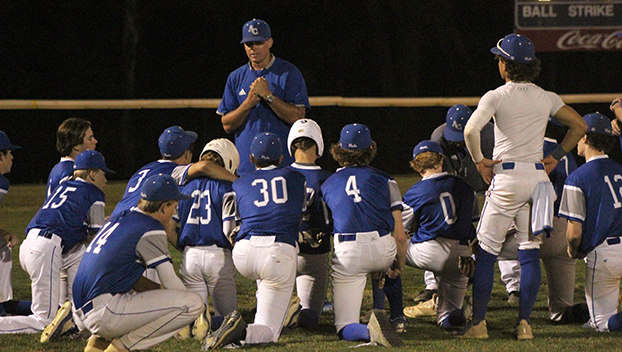 Head Coach Jake Winston speaks to his team after a game against Madison St. Joe. It was one of their best performances of the season and led to them winning a district series against St. Aloysius. Winston will lose one senior DK McGruder and return the rest of his squad next season. (Hunter Cloud | The Natchez Democrat)

VICKSBURG — St. Aloysius opened their season finale against ACCS with three runs in the first inning and never looked back. The Flashes went on to win 9-4 Wednesday evening despite being outhit by ACCS to win game one.

Rebel Crews Marchbanks had three hits and one RBI in the game while Colton Rabb had two hits. AC cut the lead to 6-4 in the fifth inning but gave up two runs in the bottom half of the frame and one more in the sixth.

AC left 19 runners on base and St. Aloysius left 22 runners on the pond. Flashes pitcher Matthew Pitre threw seven innings and struck out five batters to earn the win. Conor Aplin threw 4.1 innings of work and struck out eight batters.

AC got its revenge in the second game with a 5-3 win over the Flashes. Jack Krevolin had two hits on the night and senior DK McGruder had a hit and an RBI. The Rebels scored three runs in the sixth inning to take control of the game and added an insurance run in the seventh.

“I’m proud of the way these kids played. I feel like they had fun these last three games and that is what baseball is all about,” Head Coach Jake Winston said. “I was really proud of their efforts and attitudes. It was a lot of fun to watch and fun to be a part of.”

“I’m looking forward to the team and the squad we will have. We are looking for all of those guys to step up and be a leader one through nine,” he said. “I told them at some point players have to be player coaches. You have to help out your teammate.”

Summer workouts will consist of weight lifting twice a week, bullpen once a week and another day set aside to learn fundamentals and knowledge of the game. Winston said one lesson they took away this season was they have to be more prepared next season.

In July, a lot of those players will move on to football until the end of the football season. AC learned they need to start the season fast and finish strong. The Rebels finished strong winning four of its last six games and had a district series win against St. Aloysius.

Winston said this year there was not a turning point for his squad where momentum shifted in their favor. There was a practice the day before they played St. Joseph Madison where they did not have a good day. He shut down the practice.

AC ran a grueling exercise instead of practicing. The kids hated it but they played better baseball after then. He said the kids joke that maybe they need to run the exercise before every game. It was not a true turning point, but AC narrowed its roster down to a group of guys who wanted to be there.

“When you have that, that is when you will find success,” Winston said. “That is what happened to us at the end. We will return everyone but DK next season. I have some young kids ready to step up in his role as a do it all player. I’m excited to see how they will do next year. I’m excited to see who steps up next year when their name is called.”

Senior walks it off for Green Wave over Cougars