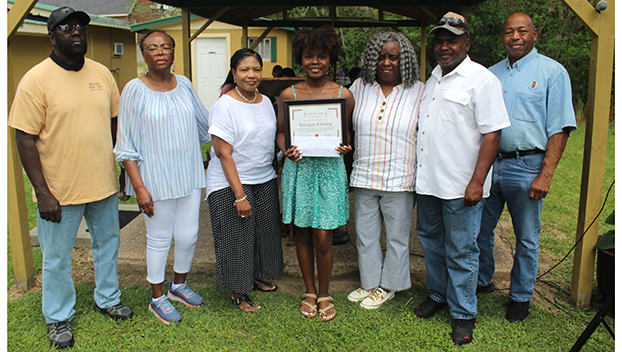 Each year Monroe and Betty Sago present a scholarship to a student who has good grades and wins an essay contest about the Rhythm Night Club Fire. From left, Monroe, Betsy, Natalie Lyles, Kerrigan Winding, the scholarship winner, Yolanda Winding, Demestra Winding and Wilbert Whitley. Kerrigan will attend Southern Mississippi where she will earn a degree in speech pathology. (Hunter Cloud | The Natchez Democrat)

NATCHEZ — Roscoe Barnes with Visit Natchez was a guest speaker at the 82nd anniversary of the Rhythm NightClub fire. Monroe and his wife Betty Sago own the museum built on the hallowed grounds of the worst fire to hit Natchez.

This year’s theme was Get up, Get dressed, we have work to do after a saying Betty heard as a kid growing up on a farm. Barnes, an Indianola native, described the night’s tragedy and impact on Natchez as if he was there when 209 souls perished in the inferno.

“Tears were shed, blood was splattered and bodies burned. It was a sad night. There was crying into the night. People bowed under the unbearable weight of grief,” Barnes said. “They saw what no one should have to see here. Had it not been for the Sagos no one would know this story. People from all over are learning about this piece of history.”

Survivors and families of survivors shared their stories with the Sagos. It inspired them to open the museum. It is a way for them to honor those who died. They didn’t go looking for the fire, but the people of Natchez who were affected by it brought it to them.

Each year they tell the same story of the fire.

“We are also here to learn something new,” Betty said. “The key thing is we have a message for us today so we can continue to build our society. We will continue to enlighten and inform the world.”

Barnes said he was honored to be invited by the Sagos to speak. He relates to the theme of getting up and getting dressed because we have work to do. His childhood summer mornings in Indianola started the same way, his mother pacing up the hall waking up his brothers and sisters so they could go chop cotton.

He noted there was a time to grieve a tragedy and a time to mourn. It took him a while to learn his mother’s brother had died in a motorcycle accident. One day he asked his mom if she ever got over it. She said ‘Jr. you never get over it. You learn to live with it,’ he said.

Turning his attention back to the Rhythm NightClub fire, there is a time to get up and get dressed because there is work to be done. There are three things people can do to honor those who died on April 23, 1940, he said.

“We can honor their memory by supporting the Sagos. We stand on hallowed ground,” he said. “We must tell the victims’ stories as we work to keep their legacy alive. We must work to let everyone know who they were and what they did. Despite the overwhelming amount of grief involved with losing a loved one, it is possible by God’s grace, that something good can come out of that situation…I believe that the story of the Rhythm NightClub fire allows us to educate and inform those around us.”

He continued speaking as he tucked his notes into his suit coat pocket.

The Sagos have been able to turn the tragedy into triumph by awarding a scholarship to a student each year. Betty took to the stage as she read out information about this year’s winner. It was a cathedral student who plans to go to Southern Miss, she said. It is a student who will study speech pathology because her cousin needed speech therapy.

At eight years old, Kerrigan Winding played her first musical piece for the Rhythm Night Club memorial. Saturday, she sang and played the keyboard twice and was presented with a certificate and a scholarship check.

“It feels like an accomplishment. I did work for it. It will help me out a lot. I’m thankful for the opportunity,” she said. “Learning about the nightclub fire helped me realize more about my community. I want to help the community in any way possible. I want to give back to others. I want to work for the greater good of everyone.”