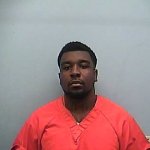 A sixth suspect, identified when the drive by was caught on multiple cameras in the area, was still on the loose until this afternoon. He was being sought for shooting into an occupied dwelling and drive by shooting.

Patten said neighbors in the Myrtle Drive and Red Bud Lane area have responded to calls by his department to install residential security cameras and have given the Sheriff’s Office access to those cameras, the result of numerous Neighborhood Watch meetings in the area.

“Residents installed those cameras to help us. It certainly helped us to make quick arrests and bring closure in this case,” Patten said.

“We encourage other citizens to do the same. We now have cameras all up and down those streets in that area. You are more than likely to be caught on several cameras in that area and if we see you involved in illegal activity, we are going to arrest you. Period,” he said.