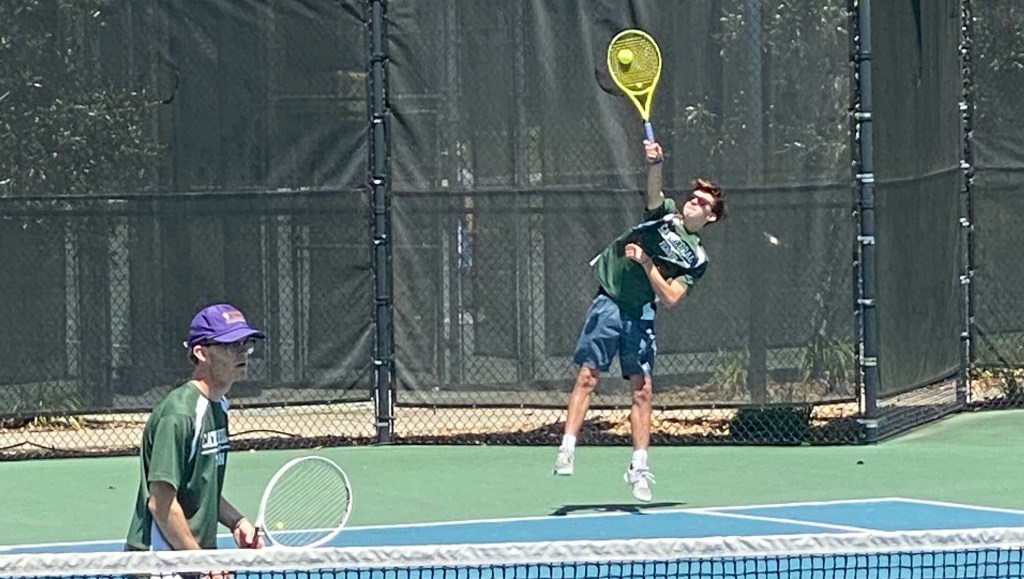 Grayson Guedon makes a serve during South State. He is a junior and will play with senior Joseph Garrity one final time at State. (Submitted Photo | Green Wave Athetics)

NATCHEZ — Cathedral’s tennis team leaves for the state finals on Thursday. Four of the seven Green Wave players left in the competition are seniors.

Joseph Garrity, Meredith Lessley, Brady Gamberi and Cate Drane will play their final matches for the Green Wave. They are a close-knit squad, and juniors Huddy Lees and Grayson Guedon often joke with them in practice. Freshman Alex Monagan, who is usually reserved, will joke with the team.

They are loose, but they are dedicated. Head Coach Beth Foster said her team wants to bring home state titles badly. At South State, they took the title in boys and girls. Drane said they rocked the competition.

“It means we put in a lot of hard work and dedication to reach state,” she said. “We improved from last year, and we rocked South State. It’s an accomplishment.”

Cathedral won South State’s girls title with three girls and no singles players. Lessley plays in mixed doubles with Gamberi. Foster said it was a hard victory to pull off when other teams had their entire team at the competition.

Drane and Lees will take the court against two players from Leake Academy Thursday at 9 a.m. in Ridgeland. There is a lot of pressure on their shoulders, Lees said.

She missed practice last week with a leg injury but said she would be ready to play Thursday.

“I’m always ready no matter what is thrown at me,” Lees said. “I’ve been taken care of by Michelle Kaiser. I’m in very good hands.”

Drane added “I told her she could cry after we won.”

It won’t be an easy task for the Green Wave. Garrity and Guedon will play a doubles pair from Heritage. They said the north teams of Mississippi are challenging competition.

Garrity said the northern teams have been pretty dominant in the last few years.

“It is time for someone to take them off their pedestals,” Garrity said.

“Yeah, we gotta kick them off their Clydesdales,” Drane added.

Grayson and Garrity played together last season and lost early in the tournament. It will be the last chance for the passionate players to compete together.

“I’m not looking for a repeat of last year,” Grayson said. “We had our butts kicked by some demigods from Lamar.”

Before the end of practice, Foster asked them to run two times around the courts to condition for Thursday. Last week the sun was beating down on the court, and it became a frying pan.

Heat could play a factor in the state tournament, but they should be ready for the moment. Gamberi, who will play with Lessley against a mixed doubles pair from Simpson Academy, said it would  “Take more hardwork and dedication,” to win a state title.

One player was absent during the practice. Alex Monagan plays singles for Cathedral. He typically practices with the team and individually with Kahari McNeal from Natchez. Legendary tennis coach Henry Harris has him work on his game whenever he is not with Cathedral.

Foster said after South State, her players came off the court tired, but Monagan was still running circles with his energy. He will take on Joshua Tedford of Heritage Academy at 10 a.m. Thursday. While the rest were finishing practice, he was still training for State.

“I think he has a cot in that pro shop,” Foster said. “I come out here anytime of day, when we don’t have school, and he is here. He has more dedication than any player I have ever coached. I started coaching in 2013.”