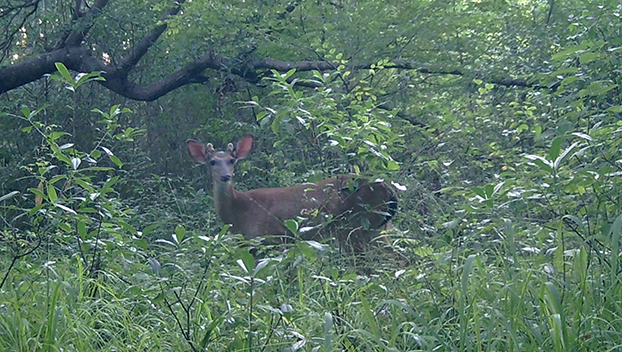 This is a young buck in velvet at the end of July captured on a trail cam in Lincoln County. Mississippi's velvet hunting season will be open September 16 to 18, 2022 and has a one buck bag limit for the three day weekend. (File Photo | The Natchez Democrat)

JACKSON — Mississippi Department of Wildlife, Fisheries and Parks created rules and regulations for the Special Velvet Hunting season in their commission meeting on April 21, 2022. The velvet hunting season was signed into law by Governor Tate Reeves on April 15, 2022.

Assistant Deer Program Coordinator Kamen Campbell said the season regulations followed closely with what the legislation said. Here are those proposed rules and regulations. They will enter a comment period of 30 days.

The department is being conservative with how many days they have the season open and keeping it to private land only for the first season. They want to see how successful the hunters are and the level of participation.

“States have varying degrees of success. Some states have a small percentage of buck harvest come from this season,” Campbell said. “We don’t want to provide too much opportunity out of the gate not knowing how it will impact the population. We could change it in future seasons if we think it won’t have a negative impact on the resource.”

Tennessee is the closest example Mississippi has to compare as far as participation. Campbell said 750 bucks were harvested in their velvet season last year, which is less than one percent of their annual harvest.

“I don’t expect a huge number of bucks to be harvested but some really good bucks will be harvested,” Campbell said. “This season will be for the people who are brave enough to brave the mosquitos and 85-degree heat for a buck.”

St. Catherine Creek National Wildlife Refuge could adopt the special season but it would have to wait until after the MDWFP begins the season on public land.

“Hunt plans are prepared through communications/meetings between the project leader for the Theodore Roosevelt National Wildlife Refuge Complex and the state wildlife management agency,” a USFWS Spokesman said. “A hunt plan may be established several years in advance of a hunting season. In the event that a new state hunting regulation occurs, it is difficult to know at this time if the refuge would adopt it in a future season.”

Harvests reports are mandatory for the MDWFP to keep track of the bucks taken and to help enforce the mandatory CWD sampling for the weekend. CWD sampling is required with this special season because the department has had trouble getting samples from hunters.

In the past, the MDWFP tried mandatory weekends for different parts of the state. They want to continue monitoring the presence and prevalence of CWD in different counties. It takes several hundred samples per county to monitor CWD.

“This weekend is mandatory. Hunters have to purchase a special permit and enforcement officers will be able to enforce it,” Campbell said. “All of the samples we will get will be mature bucks. Data has shown mature bucks are more likely to have CWD than does. They have five days to get their deer submitted for sampling after harvest.”

Bucks go into velvet during the spring and summer. According to the Mississippi State University Deer Lab, Antlers will grow as fast as ¾ of an inch a week for yearlings and 1 ½ inch per week for adults during peak growth periods.

The growth rate of antlers slows dramatically during late summer. Autumn equinox causes the velvet’s death, when dry enough, and it can be removed in about 24 hours by scraping on vegetation.

Antlers look like they are covered in shiny velvet because sparse hairs grow straight out and are covered in oily secretions. Underneath this velvet, the antler is growing strong beneath another layer called perichondrium. Campbell said the bucks harvested in this season must meet the legal antler requirements for each deer management unit.

“Even though it is called velvet season, it doesn’t have to be in velvet to be harvested,” he said. “50 percent of the bucks shed their velvet by Mid-September in North Mississippi. In the southern part of the state, it may be as high as 85 percent of bucks have their velvet.”