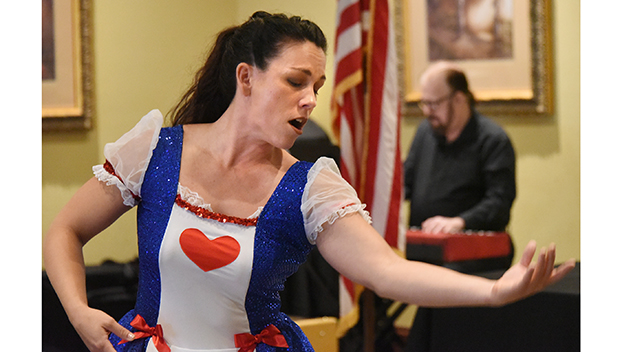 Tjaden O’Dowd Cox, an opera singer and singing aerialist, performs for The Rotary Club of Natchez on Wednesday, promoting the beginning of the 31st season of the Natchez Festival of Music. She was accompanied by Richard Nechamkin on keyboard. (Ben Hillyer | The Natchez Democrat)

NATCHEZ — The Magic of Opera kicks off the 31st season of the Natchez Festival of Music on Saturday at the Natchez City Auditorium.

This year’s festival, which runs through May 21, covers a variety of genres of music, Diana Glaze told members of The Rotary Club of Natchez on Wednesday at its meeting at The Grand Hotel. Glaze, a Rotarian, is also chairman of the Natchez Festival of Music.

“Opera is the NFL of singing. Once a voice reaches what these singers can do, that’s the pinnacle,” she said.

Tjaden O’Dowd Cox, an opera singer and singing aerialist, performed for Rotarians. She was accompanied by Richard Nechamkin on the keyboard.

For more information and to buy tickets, please go to natchezfestivalofmusic.com.