‘So freaking bittersweet’: Mama Dog hit and killed; rescuers save her puppies 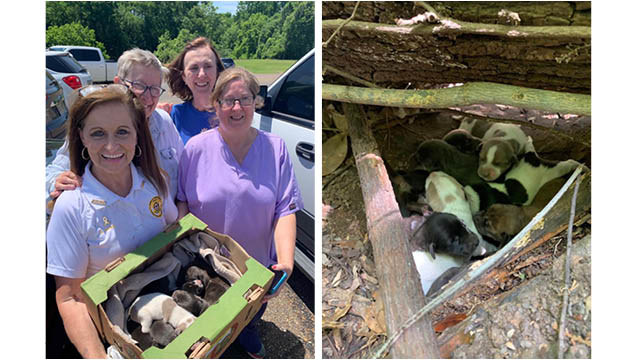 Adams County Sheriff's Office's Karren Holland Ewing holds a box filled with eight puppies, orphaned when Mama Dog was hit and killed this morning. Behind here is Linda Kennon, who has been working diligently to rescue Mama Dog. With them are, back, Peggy Ballard and Jennifer Raspberry, who helped search for the puppies. (Submitted)

NATCHEZ — “Mama Dog,” who captured the hearts of many in Natchez, was tragically hit by a vehicle and killed near the Donut Shop on John R. Junkin Drive this morning.

A woman who had been following her story on social media saw the incident and stopped to try to help Mama Dog. The driver of the vehicle who hit her did not stop.

The woman called her husband, said Karren Ewing of the Adams County Sheriff’s Office. Her husband came to the scene, wrapped Mama Dog in a blanket, but she was deceased.

The Mama Dog had given birth in a wooded area about five days ago near the Subway restaurant. Volunteers made their way to the site this morning at the news of Mama’s death to help search for her newborn puppies.

“This is just so freaking bitter sweet,” Ewing said. “When we found the puppies, we screamed. They had been very quiet, but when we screamed, they started singing!”

Early on, Ewing enlisted the help of Linda Kennon of Natchez, an experienced animal rescuer, to lead the effort to rescue Mama Dog. Kennon put in untold hours working to win Mama Dog’s trust. She began feeding her near a gate in a wooded area near Elms Court.

“Linda has been the one who has been monitoring her and going and sitting and feeding her and talking to her from a distance,” Ewing said. Kennon worked to try to feed Mama Dog three times or more each day near the gate in an effort to keep her away from the road and isolated.

“Since she had her puppies, she had not been seen crossing the street much,” Ewing said. “None of us have had experience with a dog who simply refused to be caught. And she refused. We were working to just keep her off of the highway.”

“Linda is very, very upset. She carried the heaviest emotional burden. There is nothing more she could have done to try to get Mama Dog. She was there constantly changing food and water.”

The puppies were taken to Dr. Tracy Peltier at Southside Veterinary Clinic, as was Mama Dog’s body.

Ewing said Kennon plans to have Mama Dog cremated. And, Ewing said all agree that Kennon will take the puppies once check out by the vet and will handle bottle-feeding and raising them.

Ewing said people may donate to a fund at Southside Veterinary Clinic to help the puppies and other dogs in need in the area.

“We have a fund at Southside Vet Clinic that takes care of things like when an animal needs surgery or some other kind of medical care. People can donate to a specific animal, as well. That fund helps to pay for situations like this one,” she said.