“Super Bowl of Field Trials”: Dog competes in first Grand Championship, volunteer is excited to be a part of his 27th 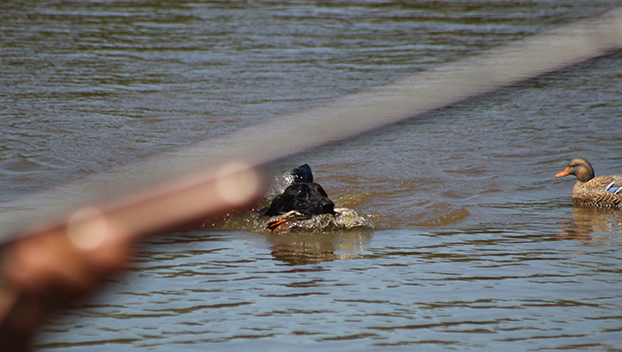 Handler Trent Nugier fires a fourth shot as his dog Coal swims back with a bird in his mouth. This is a part of one of the blind retrieves a dog must complete. Hunting Retriever Club Grand Championship is one of the few competitions that allows for the use of real guns during field trials. The shotgun shells are loaded with a 209 popper primer but do not have any bird shot. (Hunter Cloud | The Natchez Democrat)

NATCHEZ — Yellow signs point to Avery Water, Priefert Land, Banded Water, Lucky Duck Kennels and Oubre Water across US61 South to Kingston Road. A couple of miles another sign points to the left to drive to Oubre on Greenfield Road.

The Oubre competition site for the Hunting Retrievers Club Grand Championship is best described by the program director Mark Evans as at the end of a guy’s driveway. Cows graze in the front field but as you drive to the back pasture a row or two of trucks appear and to your left is a pond.

Bare timber in the middle of the pond gives the impression of a morning in a duck blind. Evans said they sadly had too many thorns so they weren’t able to incorporate them into the field trial being run there. He is a Vicksburg native and a member of the Amite River Hunting Retriever Club, who is hosting the grand.

“It’s a fascinating story of how we got here. Last Sunday we were setting up at one of the ponds in Vidalia and they found about 13 alligators so we had to find somewhere else,” Evans said. “Luckily, someone knew the owner and they were gracious enough to let us come out here and set up.”

He started going to the grand twice a year starting in 2006. This is his 27th grand to come to, 22 of those he ran a dog in and four of them he was a judge. Now the retiree is a volunteer working to run the field trials at Oubre. There is a lot of behind the scenes work, he said.

One person has to get the ducks ready, one has to set up the decoys and get the drinks put out. They have to set up tents and make sure they have everything in place. Evans said he has by far the easiest job of the week, making sure people don’t miss their turn.

“It is a lot less stressful. It is the easiest job to make sure no one will miss their turn,” Evans said “The only complication is if a winger screwed up and the bird didn’t go out of the blind. They will run that dog again and move them back three guys. I have to make sure the next guy who should go does. I have never seen someone miss their turn.”

It is a scenario that played out a couple times as one bird didn’t get put out or a cow caused a distraction to a dog, which the judges decided to give a rerun. Evans would take his Real Tree Edge camouflage umbrella and hold it one hand as he wrote the change on a white board hanging from his truck tailgate.

A lot of the competitions feature the same elements but are played out in different scenarios. Dogs are judged on two things, he said. Marking and memory. When the wingers throw a bird out of the hole the dog has to mark them and pick them up without help from the handler. The last bird is easy and then the dog has to remember the others.

Another thing judges are looking at is the dog’s control. Dogs need to walk by their handler’s side on the way to the chair. Once the handler starts shooting the dog needs to sit still and not break.

The most challenging part of the test is when the dog must retrieve a blind. This is simulated by the handler firing an additional shot while their dog is coming back to them. A handler then has to show the dog how to get to the bird with a series of whistles and hand signals called castings.

Now he can sit back and watch the dogs run the trial without worrying about how his dog will do.

“I told Tracy Stubbs, the chair, I was just as excited as I have ever been because it’s the grand but I’m not nearly as nervous as I have been in the other ones especially when I was handling,” Evans said.

Walking down to the judges tent he made careful movements to not distract a dog in a field trial. Trent Nugier sat behind a blind in Sitka camouflage. A dog he trains named Coal sits at his feet as they wait their turn to run.

Nugier said they are currently staying in between Natchez and Woodville at The Sanctuary. Last night they ate at one of the local restaurants Roux 61, he couldn’t pass up the fried pickles.

Finally it is their turn to go so they step up to a platform and Trent loads three shells loaded with 209 primer poppers and no shot into a pump shotgun. The Grand is one of the few competitions that allow for the use of a firearm, he said.

A Maurice, Louisiana native, he is running a dog owned by Ollie Dupuis. He has trained him for three to four months before the Grand Competition.

“This is his first grand. It is stressful because he is still a puppy. He is a ball of fire. You never know what to expect at a grand,” Nugier said. “A dog has to be perfect for four days straight. He is doing great so far. We have one more day of marks hopefully he can get through it.”

He utters his release word, Coal, as a black ball of fur cannonballs into pond water and paddles to his first bird. He brings back a mallard before going after two more marks and a couple of blind retrieves. By the time he finishes Nugier can breathe a sigh of relief.

“He did amazing. I couldn’t ask for a better job with him. He did fantastic. I’ve had him since January and the owner did a lot of training with him,” he said. “It is a lot different running my own dogs. You don’t have as much pressure. The guys are paying money to see their dogs do good. It is very stressful running someone else’s dog.”

Thursday is the final day of retrieval events before the dogs compete in the Upland Series in Friday’s finale.

Gov. embarrasses us all with Confederate Heritage Month proclamation,…