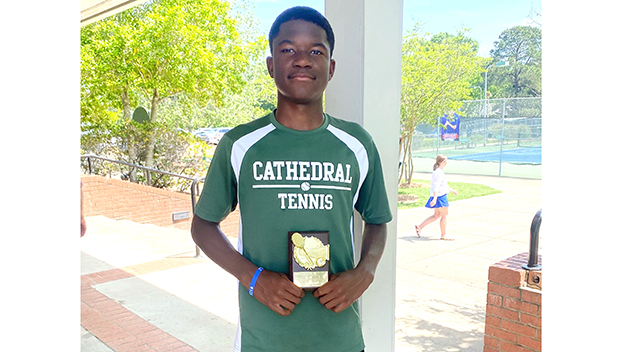 Alex Monagan, a freshman, won a state championship in the MAIS 5A State Tennis Finals Thursday afternoon. He is already looking ahead to preparing for next season. (Submitted Photo | Green Wave Athletics)

RIDGELAND — Cathedral has a state champion in tennis. Boys singles Alex Monagan won the title Thursday afternoon as a freshman.

It is his second state title this school year, as he was a member of the Cathedral Cross Country team that won a State Championship.

“It feels good. I’m excited, but I know I have to get better and get ready for the next season. Coach Henry Harris needs praise. Without him, I wouldn’t be here,” Monagan said. “I wouldn’t be here if it wasn’t for coach and how much he taught me. He has taught me for about seven years. He is like a second dad to me. He helps me with anything, and it is more than just the game of tennis between us in our relationship.”

Harris was there, but he had to go home before Alex received his state title trophy. He said it felt great having his coach there with him.

Alex’s final match finished 6-2, 6-2. He did a good job keeping balls on the court and moving the player around. It is what he and Harris practiced.

“I haven’t celebrated yet. I probably won’t. I have to start practicing again and get better for next year,” Monagan said. “My main goal is to go to division 1. My immediate goal is to get better every day. I just want to be better on and off the court.”

Cathedral’s Girls doubles reached the finals, head coach Beth Foster said. They held their own and played well and didn’t give up. They came back from a 5-1 deficit but lost 6-3, 6-3.

She said Alex was hyping himself up on the court. It was a good matchup between him and a 10th grader.

Cathedral’s boys’ doubles and mixed doubles fell short of the finals today. Meanwhile, she will see Alex, Lees and Guedon return next season.

“They got in their heads. I hate it for my seniors. I feel for them. It was just a bad day for them. You have bad days sometimes,” Foster said. “I can see Alex growing over the summer and getting even better. We will be playing in the same competition.”