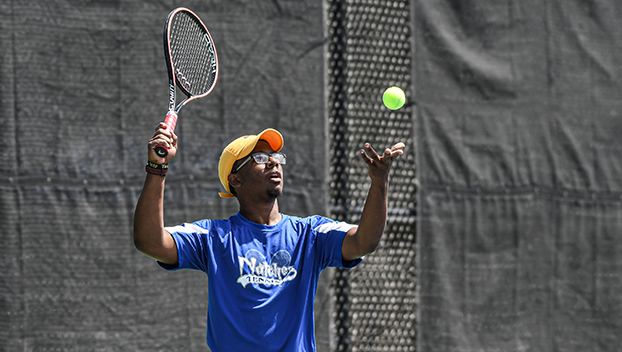 OXFORD — Natchez High School sent four players to tennis state and they gave it all Thursday, Head Coach Delores Whitley said. While they didn’t win a title they had reason to celebrate as they gathered around a Hibachi grill.

Senior Samaria Spears had a great first round, Whitley said. It was the first time she had made it to the state tournament. College coaches from Lemoyne-Owens in Memphis and the Mississippi University for Women in Columbus took notice of her efforts in the first round.

“Even though I lost in the first round, to end my senior season I was blessed and honored to go to state,” Spears said. “In the four years I have played I haven’t gotten to go. I was pretty nervous. Getting noticed by college coaches showed me my hard work has paid off.”

Kahari McNeal, Danato Miller and Alexis Woods reached the second round but did not advance. Miller and Woods went to a tiebreaker third set and lost 3-10. It was one of their best matches of the season.

It was a surprise to Miler. The second group they played was really good and they had them on the ropes a few times.

“It really felt good. My teammate was keeping me up. Playing in the tiebreaker it became a lot more stressful. Our team’s season ended in a tiebreaker,” Miller said. “My teammate had my back and I had hers. I think today I played the best tennis today. I was surprised by some of the shots I got. I was really proud of how I have grown thanks to my coaches and partners for supporting me. I could feel the rush of adrenaline the entire time.”

Adrenaline drained his energy and by the end of the second match Miller walked off the court and took a seat on a bench. He didn’t move for a while. When the team was finished they went to a hotel and he laid down completely drained.

He said his performance gives him inspiration to try out for a team in college. His playing partner Woods found positives in the match. It was her best match of the season too, she said.

“It is validation that I’m actually pretty good. I’ll be a lot better next season,” Woods said. “I will have the option of playing mixed doubles or singles next year so I’m not sure yet what I’ll pick. This summer I will be out of town a bit but when I’m in town I’ll be practicing a whole lot.”

Tennis coaches Henry Harris and Katrina McNeal helped greatly with the team Whitley said. Her team had grown by leaps and bounds over the season. It will be a mostly young team returning next season. Tyrese Wilson, Spears and Miller graduate and leave the program this year.

Kahari will return next season as the Bulldog’s No.1  Boys Singles. He lost in a rematch to a kid from Vancleave but it was an improvement. Whitley said she believes in a few years he will come away from the state championship with a title.

“I felt like I had improved throughout the season,” Kahari said. “It was nerve wracking and fun to play at state. It is going to take hard work and dedication to get back next year. I want to make it to the semi-finals next season.”

Katrina said even after the season was over for much of the team the kids still wanted to continue practice. The summer will be an opportunity for the Bulldog’s team to grow like they did over the regular season, she said.

“I think the kids began to work hard. They got to a point where they wanted it more,” McNeal said. “We got them to learn how to position the balls. We understood tennis to be more of a mental game. Positioning is important. You have to outsmart someone. They picked it up at the end. We had worked on it in drills. They wanted to learn. It is amazing we have kids who want to learn.”

TIME TO PRAY, National Day of Prayer to be…