Miss-Lou Relay for Life is back for 2022 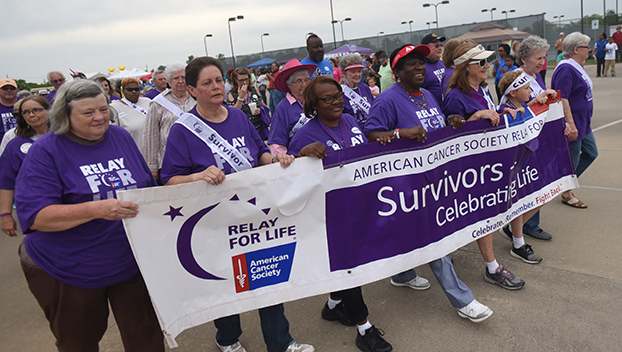 Cancer survivors make the first lap of the 2019 Miss-Lou Relay for Life at the Vidalia Municipal Complex. (Ben Hillyer / The Natchez Democrat)

VIDALIA — Pre-COVID, in 2019, the Miss-Lou Relay for Life ranked third in the nation per capita for most funds raised to fight cancer, said Stacy Cross, American Cancer Society Representative from Brookhaven.

Teams across the Miss-Lou are gearing up to race to the top again this Friday, May 6, for the Miss-Lou Relay for Life.

“This year, we have 26 teams signed up and it’s never too late to sponsor or donate,” Cross said.

Denise Davis, Chairperson for the 2022 Relay for Life, said there is still time left for teams or individuals to sign up and reserve a tent for the Friday event at the Vidalia Concordia Recreation District 3 Park next to the Vidalia municipal complex. Set up will be on the concrete area next to the tennis courts.

“As long as they sign up by Tuesday, May 3, with a minimum of $250 raised we can ensure them a tent space,” Davis said, adding all of the funds raised go to the American Cancer Society.

Go to cancer.org to sign up as a team or donate as an individual.

The first Miss-Lou Relay for Life was held at the Natchez Mall in 1995, she said.

The event is widely participated in by others just as passionate about the cause as Davis.

One keynote speaker is Dusty Oaks of Team Bob, who hosts a massive car show raising funds for the Relay for Life each year called “Cruising for a Cure.”

Oaks is a three-time cancer survivor.

The Relay kicks off with a survivor reception at 4 p.m. followed by a welcome to everyone else at 6 p.m. The festivities are free for anyone who wants to attend. There are several vendors and a silent auction.

“It has been a labor of the town putting it all together,” Davis said. “The Town of Vidalia has been truly amazing.”

The heartwarming part of the Relay is the lap. Survivors walk first, followed by survivors and their caregivers and the relay teams who all rally behind them to fight cancer.

Luminaria bags can be purchased at the Vidalia Women’s Club tent the night of the relay for $10 each, which will be lit for the luminary service at 9 p.m. Silent auction winners will be announced at 10 p.m.

TIME TO PRAY, National Day of Prayer to be…