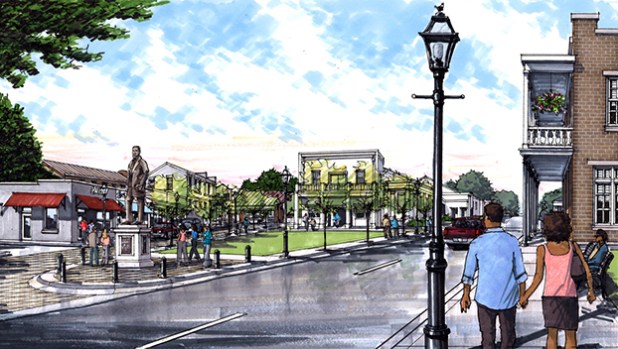 The City of Natchez plans to develop the Martin Luther King Jr. Triangle area into Hiram Revels Plaza. A rendering of the plaza is pictured. 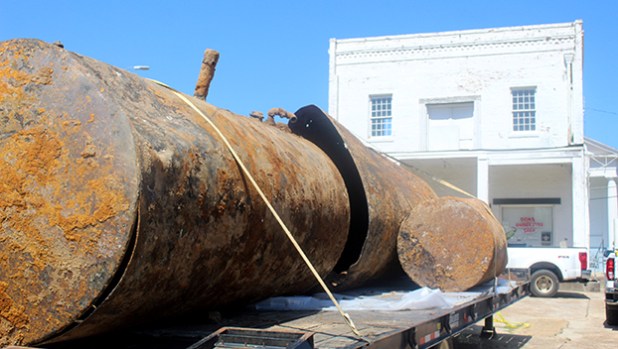 Workers removed four underground gasoline storage tanks from the site of an old gas station in the “triangle” where Don’s Barbershop is located. The tanks had to be removed due to environmental concerns. The city plans to develop the area into Hiram Revels Plaza. (Hunter Cloud | The Natchez Democrat)

NATCHEZ — Underground storage tanks came out of the ground at the former Texaco gas station, located in the triangle at St. Catherine Street and Dr. Martin Luther King Jr. Street in Natchez.

The work is part of Phase One of the creation of Hiram Revels Plaza.

Revels Plaza is a part of the city’s master plan to create a park to honor the Rev. and Sen. Hiram Revels, who was pastor of Zion Chapel AME Church in Natchez, which is located across from what will become Revels Plaza.

Revels was the first African American member of either branch of the U.S. Congress from 1870 to 1871, said Natchez Mayor Dan Gibson. He was also a chaplain in the Natchez U.S. Colored Troops and served as the first president of Alcorn State University, which is the oldest Historically Black College and University in the country.

Mrs. Norma West, who is trustee pro tem of Zion Chapel and a board member of the Downtown Natchez Alliance, is serving as Zion Chapel’s project liaison. Zion Chapel owns the property in the triangle area.

Chesney Doyle, a director of Friends of the Riverfront, said the removal of the underground tanks would be followed by removal of the remaining concrete in the area and installation of sod.

“We are calling this project the ‘greening of Revels Plaza,’ ” Doyle said.

The third phase of the project will include completing engineering and landscape designs and Phase Four will involve fundraising and final execution of the plans, she said.

The environmental coalition includes the city, county and Friends of the Riverfront, Doyle said.

The City of Natchez, Zion Chapel and the new Downtown Natchez Alliance spearhead the creation of Revels Plaza Project.

“Revels Plaza is one of the three key anchors of the downtown Natchez master plan,” she said.

In 2015, the non-profit Friends of the Riverfront partnered with the city to raise funds and orchestrate a downtown master planning process, Doyle said.

“The plan was based on community engagement, economic studies involving retail market analysis and housing market analysis, physical surveys and interviews with stakeholders,” Doyle said. “Since that time the city, in particular Mayor Gibson, has used the master plan the way it is intended to be used — for attracting investment and promoting development.”