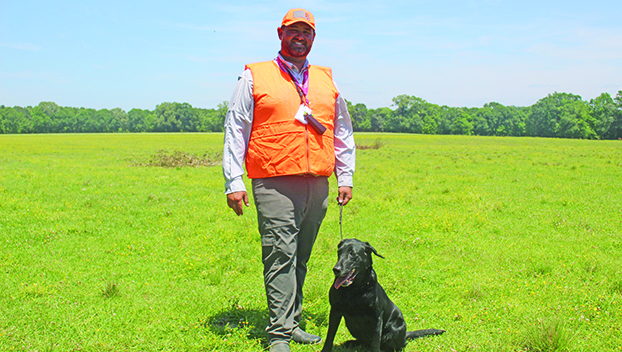 Clark Kennington poses with the dog he trains after successfully completing the upland hunt test close to where The Dart landed Friday. Kennington is a Grenada native and worked for Leo Joseph at Rivertown Retrievers for a little bit before going to Georgia. The handler passed 13 dogs, the average pass rate for dogs in the Grand is 20 percent. (Hunter Cloud | The Natchez Democrat)

KINGSTON — Hunting Retriever Clubs Grand Hunt Test wrapped up its final day in a field off of Deerfield Road, close to where The Dart landed Friday.

Clark Kennington, a Grenada native, was competing in his 28th grand trail. He brought 17 dogs and passed 13, far exceeding the average of 20 percent.

It is the third year in a row he has passed dogs in double digits, and he may have set a new record.

“I’m proud of the crew, they worked really hard and I’m glad they could show all they could do,” Kennington said. “Getting all 13 through the upland was a huge feat. To get them all through was huge.”

Kennington started training dogs 16 years ago while he was a student at Mississippi State University. In his first year training dogs, he went from two to four. It quickly grew to 16. He started making more money training dogs than his friends did with college degrees.

“I grew up hunting ducks in the Mississippi Delta my whole life. I knew what a duck dog was. When I was introduced to the competition, I loved it,” he said. “I realized I could train them year-round. It became an obsession and a career.”

After leaving Starkville, he ran a kennel in Grenada before moving to Texas and making a pit stop in Natchez. He worked with Leo Joseph at Rivertown Retrievers for a little bit. Then he moved to Southeast Georgia and now works at Mossy Pond retrievers.

In his spare time, Kennington likes to hunt or visit Universal Studios.

Natchez’s Grand was like a homecoming for him. He said a lot of handlers asked him for food recommendations.

“It’s nice being back home in Mississippi,” he said.