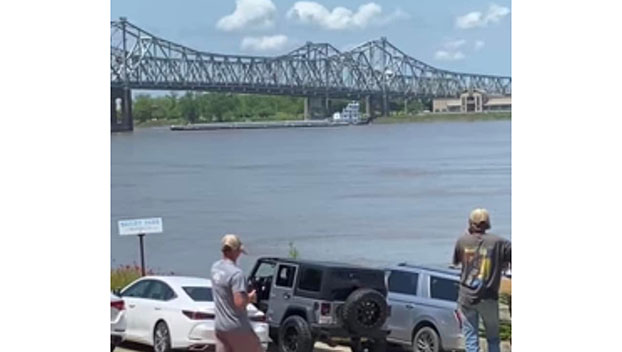 VIDALIA — Passerby at Natchez Under the Hill stopped and looked with concern at a large barge pushing against the bottom of the Mississippi River bridge on Sunday afternoon.

Weston Sparrow of the U.S. Coast Guard in Natchez confirmed that the barge struck the northbound Mississippi River bridge near the Vidalia side at approximately 12:30 p.m. Sunday.

No injuries or damages have been reported as of Monday.

“It must not have been very bad. No one called me and reported anything,” Adams County Emergency Management Director Robert Bradford said.

The reason for the accident is unclear.

“Because this is an ongoing investigation that is all of the information that we have at this time,” said a public affairs officer of the U.S. Coast Guard’s Sector Lower Mississippi.

The river was recorded as being at 47.65 feet at the time of the incident Sunday, just under the flood stage which is 48 feet. On Monday the water had receded to 47.26 feet.