“Our job isn’t done yet”: Storm move on to third round of playoffs, take on No. 1 Grand Lake 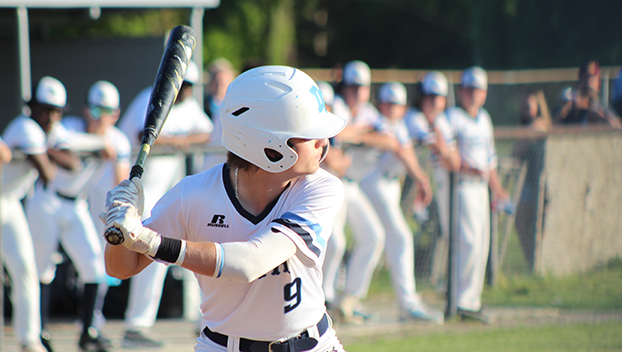 Preston Higgins had four RBIs in a 13-3 win against Northwood-Lena. The Storm are one step closer to a trip to Sulphur for the state semifinals. They take on Grand Lake next. (Hunter Cloud | The Natchez Democrat)

FERRIDAY — Navy, silver and gold confetti littered the concessions stand area, and four seniors ran out to the scoreboard to turn it off. Delta Charter 13-3 Northwood-Lena was the final as they won their last home game in a Storm uniform.

Senior Preston Higgins had four RBIs on the night. He has played for Delta Charter for the past four years and is now looking at a third-round appearance.

Grand Lake, a school about three and a half hours away and past Lake Charles, is their next challenger. Higgins is one game away from getting to Sulphur Springs, and he played a big part in getting them closer.

“It has been a crazy experience the past four years. I have worked hard, and I  want what is best for the team,” Higgins said. “I’m grateful to have the coaches I have had. We feel like underdogs this year. Everyone doubted us, and we are here to prove them wrong.”

Delta Charter’s season found positive momentum when they went on a six-game winning streak. The players started to believe in themselves.

Going into the playoffs, they had a lot of confidence. Now, they have their sights set on a semifinal appearance and a chance to win a state title.

Higgins said they will grind it out hard at practice and prepare for Grand Lake because it won’t be an easy matchup. Grand Lake is the No. 1 seed in the state.

“It will take all we got. Every play and every minute everyone will have to do our job or we won’t make it,” Higgins said. “It is not just one person who carries a team. Everyone does their part.”

Will Wiley had four RBIs in the game as did Gunner Smith. Ethan Keith got the win for the storm on the mound throwing 3.2 innings and striking out seven batters. Peyton Roberts closed out the game with three strikeouts in 2.1 innings.

Head Coach Nic Kennedy’s family was on the field to celebrate the win. He held one of his kids as he talked. First, he thanked his coaching staff Andrew Doughty, Trenton Miller and Stephen Collins  for helping him this season.

He said at the start of the year he had some expectations for the program. Seniors stepped up and led the team. He is grateful to them and the coaches for their work.

“I’m only as strong as what I’m surrounded by. We take it one step at a time here,” he said. “We have accomplished a lot but our job isn’t done. If you want to be the best, you have to beat the best. If we can continue to compete we will be in the game at the end. My boys won’t stop until the last out and that is what I’m proud about.”

The game will be at Grand Lake on May 6 with first pitch set for 6 p.m.

Inside Sports: Scenes from the HRC Grand Hunt