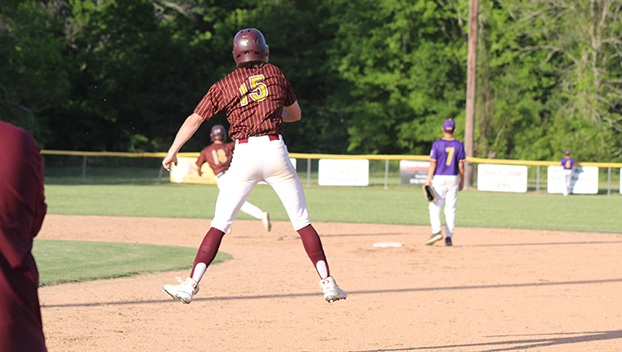 Senior Jake Crawford rounds first base and jumps into the air in celebration after seeing his home run had left the park. He started school at Monterey in Kindergarten and plans to go to ITI in Baton Rouge to become an electrician after graduation. Crawford said the homerun gave the team an energy boost. (Hunter Cloud | The Natchez Democrat)

MONTEREY — Baseball is a weird game, and some days it doesn’t go your way. It certainly felt that way for the Monterey Wolves as they fell 12-5 in a second round game to Anacoco.

Head Coach Eric Richard said they couldn’t make excuses for the loss. A two week stretch of no games wasn’t the cause for the seven run defeat.

Anacoco was the better team, he said. They pitched better, fielded better and hit the ball better. A five run fifth inning made the biggest difference in the game, and two more insurance runs in the seventh took any air out of the Wolves comeback sails.

“They got some timely hits, and when we tried to match it early, they would make a play,” Richard said. “We just weren’t able to put enough pressure on them. They were just a better team today. The ball finds the green grass some days. They hit a couple balls that bled through the infield and found grass, and we would hit it right on the nose straight to someone. They played better baseball today.”

It took an at-bat from senior Jake Crawford to pick his teammates up in the fifth inning. He blasted a three run shot over the left center field wall.

Rounding first, he jumped into the air and fist pumped. The home run might not have won the game for Monterey, but it certainly gave them some energy, Richard said.

The home run gave them a chance and cut the deficit to just six runs. Crawford, a senior, said he saw the first pitch and knew the pitcher would throw strikes on the first pitch. He swung and knew it was gone when it left the bat.

“I was on cloud nine. I tried to keep my composure,” Crawford said. “I knew as soon as I started trotting down the base path. I saw it hit the ground on the other side of the fence, and I jumped up with joy. I’ve hit home runs in the past where it changed the momentum. It changed the momentum today, and everybody got up.”

He said something he has learned from baseball as he prepares to enter the world after graduation was to keep his energy at a happy medium. Baseball can change, and all it takes is one hit to change the game. It is advice he used. After his final home game, he was calm and steady.

Crawford is one of five seniors leaving the Wolves baseball team. They are losing a lot of position players and a little over half of their lineup. It will be hard to replace that experience and power, Richard said.

“Our core pitching will be back. We have a good foundation to build off of. We have to replace some position players and pop in the lineup. We will find a way to be competitive again.”