A new era: New coaches step up for Cathedral baseball 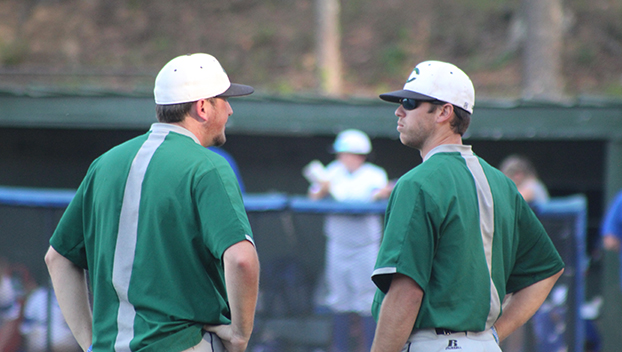 Cathedral’s baseball coach is under new leadership. Andrew Beesley, Craig Beesley’s son, will take over the helm. He is on the right as he chats with his cousin and assistant coach Wright Graning. (Hunter Cloud | The Natchez Democrat)

NATCHEZ — Cathedral’s loss to Brookhaven Academy may have been the end of the Green Wave’s baseball season but it was also the start of a new chapter.

Head Coach Craig Beesley is retiring from his head coaching duties but will continue to work as an athletic director, softball head coach and assistant baseball coach.

The plan for the program is to hand it off to his son, Andrew Beesley. Andrew, who turns 25 this year,  is a Cathedral alumni who played college baseball at the University of Louisiana-Monroe. He is also a teacher at the school.

Craig said he won’t fully understand the change until next spring when his son is the head coach.

Andrew’s grandfather Ken Beesley Sr. made his mark on Green Wave athletics for 36 years before handing the reins over to Craig in 2004. Now, it is Andrew’s turn at the helm.

“I feel excited. I grew up watching my dad and grandfather coaching,” Andrew said. “I learned how to do things the right way, like taking kids and making them into ball players. I look forward to being able to do it myself. We had talked about it for a while, but it became official right before the season started. The staff was in good hands, and he felt like I was ready for it.”

Andrew’s right hand man and cousin Wright Graning, 25, will stay on as a coach as will Ethan Loyd, Luke Bradley and Mark McCann. It will be a young coaching staff, but one full of guys who understand the game and love Cathedral.

Graning played on the nationally-ranked 5A baseball team at Charles Henderson High School that won back-to-back state championships. He is not a teacher at Cathedral but has a full time job outside of school.

Loyd, who has been an assistant coach for six years with Cathedral, said the cousins are more like brothers and share a passion for Cathedral athletics.

“It is hard to replace 19 years of experience, but with the staff we have it is pretty close,” Loyd said. “With Andrew and his intensity and mindset coming from Craig and Ken, and Wright’s passion and enthusiasm, I’m excited.”

Before this season, Wright and Andrew had only played together for one inning of a high school summer league game, and Andrew broke his ankle sliding into second base in that game. Graning moved to Natchez in 2020 and he has helped coach both baseball and football for Cathedral, following in the footsteps of his father, Tom, who was an assistant football coach for many years.

“Having the opportunity to coach and be involved as much as I can is great,” Wright said. “We will have a lot of fire. There will be a lot of emotions, which I think will end up being a good thing. I think the kids are going to be fired up.”

From the third base coaching box, Andrew sounds like his father when he yells across the diamond. He said he learned a few things from his dad this season, including lessons about managing the game, how to talk to umpires and other coaching duties.

On Monday they were discussing how to transform the batting cages at Cathedral. Craig told his dad just because the season is over the head coach doesn’t stop working.

It is a lot more difficult to be a head coach, Craig said. His experiences in 2004 taught him some lessons but it also showed him what can happen with a coaching change.

“The first year I was tough on the kids. They responded well and I think these kids will respond well too,” Craig said. “I think the biggest thing I learned was you are coaching kids and developing them into men. Some of them want to be a part of a team so they can be a part of something. When you are a head coach a lot goes into your decisions.”

There will be some pressure on the new coaching staff. Craig won a state championship in his first year as a head coach in 2004 and they will look to repeat the challenge. The coaching staff’s goal is to bring Cathedral back to its glory days.

In 2016, Cathedral was awarded the Fab-Five Baseball program by Max Preps. Andrew said this year was a positive year for the program but they want to continue building.

One of the ways they want to reach a goal of playing for state is by developing younger players. Craig will spend his coaching time working with the Middle School kids. All of the knowledge on staff will be a boost for the program.

“If you have a kid in Miss-Lou and you want them to be disciplined and developed baseball players send them to Cathedral,” Craig said. “It will be exciting for the school and the kids. If we can get these kids at a younger age and develop them it will do nothing but benefit the high school program and there will be more excitement next year.”