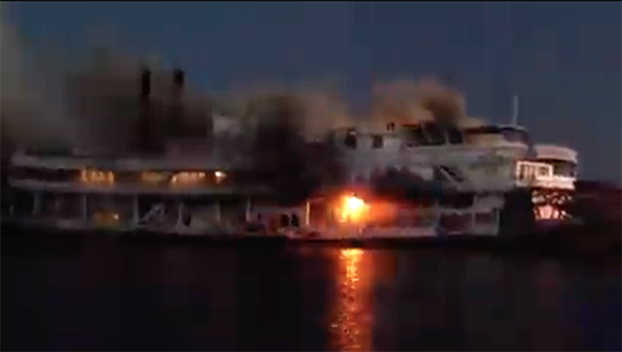 New Orleans news sources report that firefighters from the New Orleans Fire Department responded to a fire onboard the “Natchez” steamboat around 8:05 p.m. Tuesday night. Firefighters arrived to observe smoke pouring out of the steamboat.

Workers on the boat were reportedly torching switchgear panels in the engine room earlier in the day around 5 p.m.

Firefighters were able to contain the fire and prevent the fire from spreading from the boat’s engine room.

News sources report that eight units from the fire department carrying 24 personnel were deployed to the scene of his fire.
Responders say they got the fire under control around 9:01 p.m. No injuries were reported.

“Natchez” has been the name of several steamboats, and four naval vessels, each named after the city of Natchez, Mississippi, or the Natchez people. The current one has been in operation since 1975 and is operated by the New Orleans Steamboat Company and docks at the Toulouse Street Wharf. Day trips include harbor and dinner cruises along the Mississippi River, according to Wikipedia.

‘I don’t need to apologize,’ Supervisor stands behind comments…